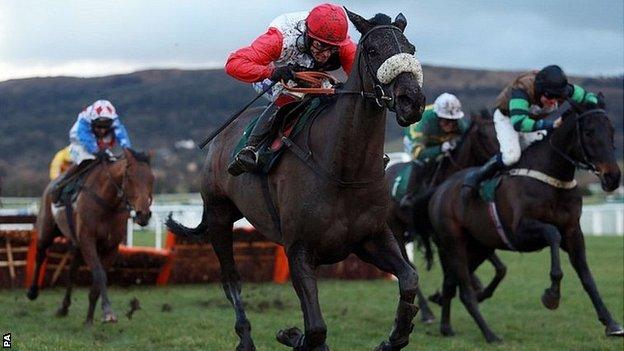 Record-breaking hurdler Big Buck's was beaten for the first time in more than five years on his Cheltenham comeback as 66-1 shot Knockara Beau won the Cleeve Hurdle.

The 11-year-old, ridden by Sam Twiston-Davies, finished third after leading for much of the race in which he sought a 19th consecutive win.

After more than a year sidelined with a leg injury, the 6-5 favourite was overtaken up the demanding hill by the winner who edged out At Fishers Cross by a short head.

Big Buck's, the winner of a record four World Hurdles at the Cheltenham Festival, was three-quarters of a length further back.

The race was run on heavy ground, with a torrential downpour and thunder and lightning at the course shortly beforehand.

"On totally different ground in March, I think you will see him right up there," said trainer Paul Nicholls.

"This will stand him in good stead. I keep saying that it's not like a footballer where you get a chance to play him for 45 minutes in the reserves."

Twiston-Davies, 21, was partnering the horse in a race for the first time after Nicholls's number one jockey Daryl Jacob was reported to be unsure about taking the ride.

Big Buck's showed he retained much of his old ability when travelling to the front, but tired in the rain-softened ground as Knockara Beau claimed the lead about 100 yards from the line under Czech-born jockey Jan Faltejsek.

It was his first defeat since late 2008 when he unseated Sam Thomas in the Hennessy Gold Cup at Newbury.

The horse then reverted to hurdles from steeplechases and won his next 18 races before a tendon problem in December 2012.

"He'll come on from that, he'll run a massive race in the World Hurdle, I promise you - he felt very special, as we all know he is," said Twiston-Davies.

Cumbrian trainer George Charlton said Knockara Beau had run well several times at Cheltenham despite this being his first victory in 16 runs there.

"I've put him in the Gold Cup and I might just run him," he said.

Bookmakers were divided about the Big Buck's run, with Ladbrokes shortening his World Hurdle odds to 5-4 from 7-4, while William Hill extended his price to 7-4 (was 6-4).

Jockey Ruby Walsh, who was on board for many of Big Buck's wins, rode unbeaten Annie Power as she clocked up a 10th successive win, in the mares hurdle at Doncaster, on Saturday.

He's a bit like his trainer - he's a bit odd

The Irishman never looked troubled on the 1-6 favourite, who won by 15 lengths and has the World Hurdle, Champion Hurdle and Mares Hurdle as Festival options in March.

Grand National winner Auroras Encore finished out of the places in the Skybet Chase, won by 25-1 chance The Rainbow Hunter, trained by Kim Bailey.

The Rainbow Hunter was the first horse past the winning post at Aintree in April, but was riderless at the time having unshipped jockey Nick Scholfield.

Meanwhile at Cheltenham on Festival Trials Day, The Giant Bolster returned to form for an emotional success in the Argento Chase.

Second and fourth in the last two Gold Cups, he was fitted with a hood and visor, and responded well for trainer David Bridgwater.

"It's emotional stuff and he's got to be back in the mix for the Gold Cup. Someone has got to finish third or fourth and we'll be happy with that."