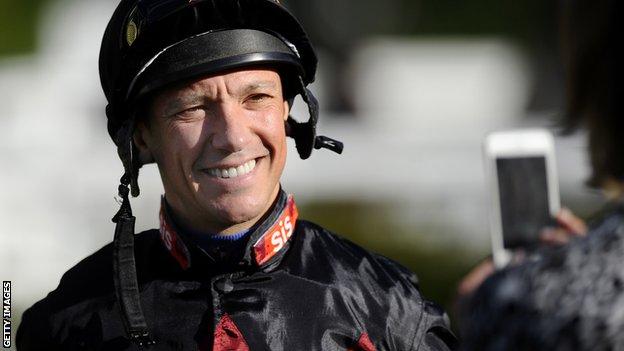 Frankie Dettori has won his first two races back after a three-and-a-half-month injury absence.

The Italian, 43, rode Eco Warrior, the first of three mounts at Lingfield, to success in the coral.co.uk Median Auction Maiden Stakes.

Then he completed a double when winning on Gone With The Wind in the the 32Red.com Maiden Stakes.

The three-time champion jockey has been sidelined since 2 October when he broke his ankle in a fall at Nottingham.

After his first win, Dettori joked "everything burns - my lungs, my arms, legs".

But he added his right ankle felt "great".

The injury, incurred on the way to the start of a race at Nottingham in October, meant Dettori missed out on the winning ride aboard Treve in the Prix de l'Arc de Triomphe.

Earlier in 2013, he was absent for the first five months of the year because of a ban for using cocaine.

Dettori was made to work hard as he steered the John Hills-trained gelding (8-1) to a narrow success over odds-on favourite Wilhana.

However, fans of racing's most recognisable jockey will have to wait before seeing his trademark flying dismount celebration as specialists who treated his ankle have told him to "take it easy".

Dettori completed his first day back in the saddle with a seventh place finish in the 32Red Conditions Stakes on board Alexandra Dunn's Exemplary, with favourite Arch Villain winning that race by a head.