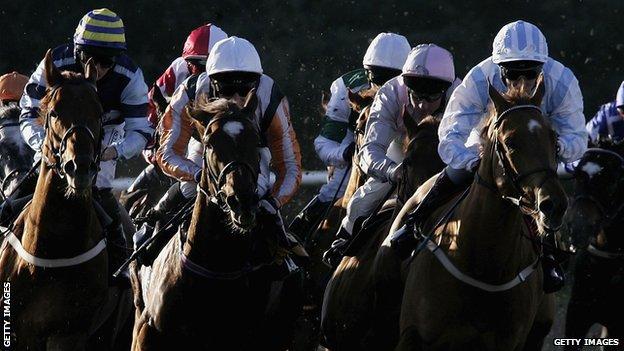 A day of frenzied betting activity on four horses cost bookmakers an estimated £2m, following the meetings at Lingfield, Catterick and Kempton.

"There are two schools of thought after a coup like this is landed.

"On the one hand, there's the one that insists no-one should be weeping at the bookmaking fraternity being outfoxed into taking a relatively unusual big-figure hit.

"Conversely, others believe such an event tarnishes racing's reputation, giving credence to the suspicion that the sport is for insiders only (three of the horses hadn't raced in ages) and is, therefore, a no-go area for others.

"Both arguments have their merits, and I'm honestly not sure which, if either, is correct.

"What can't be disputed is that gambles of this sort are perfectly legal, and add considerably to the mystique, that always has - and always will - make horseracing so intriguing for so many."

"It was a bad day [but] suggestions of a multi-million pound bloodbath are probably wide of the mark," said David Williams of Ladbrokes.

"We dodged most of the early morning frenzy but you can't stop moving trains and we got caught up in some of it as the day panned out."

Coral's David Stevens added: "Although we avoided laying some of the larger prices overnight, we did see a number of multiple bets featuring these four horses both online and in shops, and throughout the day this number increased as word of the gamble that was taking place gathered momentum.

"Victory for all four horses has cost us a six-figure payout, and based on our losses we would estimate the industry has been hit for something in the region of £2m, which although still costly, is perhaps lower than some claims."

Eye of the Tiger went off at even money, Seven Summits was the 9-4 favourite, Indus Valley was priced 4-6 and Low Key was 4-7. However some estimates suggested a £1 accumulator on the four at early prices could have brought in £13,000.

British Horseracing Authority spokesman Robin Mounsey said: "We were aware of, and have been monitoring, the situation today. In the cases of those horses who have shown an improvement in form an inquiry was held by the stipendiary stewards and all horses were routinely tested.

"It is BHA policy not to comment on specific investigations or speculation surrounding potential investigations, however an investigation would only occur if there is any evidence of rules being breached."