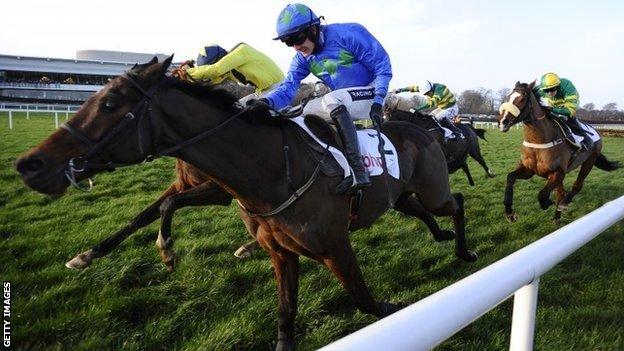 Hurricane Fly won his fourth consecutive Irish Champion Hurdle at Leopardstown to extend his world record of Grade One victories to 19.

The 10-year-old, ridden by Ruby Walsh for trainer Willie Mullins, beat Our Conor in a pulsating finish.

Sent off the 4-7 favourite despite bruising a foot earlier in the week, Hurricane Fly's win matches Istabraq's four triumphs in the race.

Our Conor challenged, but Walsh could celebrate as the winner went clear.

Mullins revealed Hurricane Fly had done "his worst ever bit of work" during the week, after which the bruise was discovered.

"If he had been an ordinary horse he wouldn't have run today," said the County Carlow trainer.

"I was so disappointed coming off the gallops. I was saying to myself, 'Is the dream over with him and has he had enough?'.

"Thankfully we found he had a bruised foot. He seemed fine the next morning and he's been fine since."

There was no sign of the gelding being affected as he travelled well throughout.

Triumph Hurdle winner Our Conor came up alongside the champion, before Walsh's mount found more to win by one-and-a-half lengths, with Jezki a further one-and-a-quarter lengths back in third.

"When I got serious with him, he found plenty," said Walsh.

Bookmakers reacted by trimming Hurricane Fly to 5-2 from 3-1 for a third Champion Hurdle win at the Cheltenham Festival in March.

He also beat Our Conor and Jezki in the Ryanair Hurdle at Leopardstown last month, although Our Conor's owner Barry Connell is looking forward to a rematch at Cheltenham.

"All credit to Hurricane Fly - this is his backyard and he's unbeaten here," said Connell of the five-year-old.

"For a young horse to run him so close we couldn't be more delighted. We'd like to think there is more improvement from our horse. He should get a bit closer at Cheltenham."