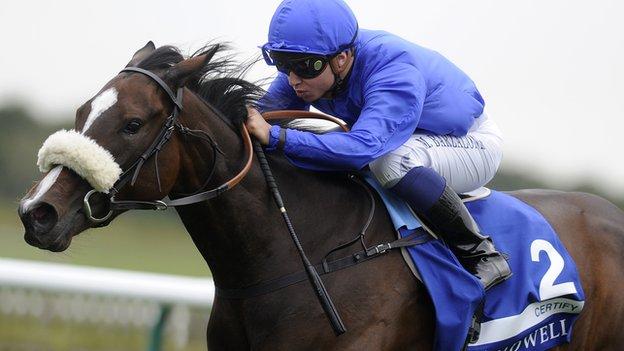 Former 1,000 Guineas contender Certify won on her return from a six-month ban from racing after the Godolphin doping scandal.

The unbeaten filly came back from a 489-day absence to claim the Group Two Cape Verdi at Meydan in Dubai.

Certify, a 2-1 winner for trainer Charlie Appleby, last ran as a two-year-old in September 2012.

She was one of 22 horses suspended from April to October 2013 after being given banned anabolic steroids.

Trainer Mahmood Al Zarooni was given an eight-year ban, and the horse is now trained by his former assistant Appleby, who took over at Moulton Paddocks in Newmarket last July.

Victory in Dubai was the fifth career win for Certify, who scored by three-quarters of a length under Mickael Barzalona from the grey L'Amour De Ma Vie.

Eddie Lynam's Pearl Of Africa was third, with the favourite Flotilla a disappointing fourth behind the winner.