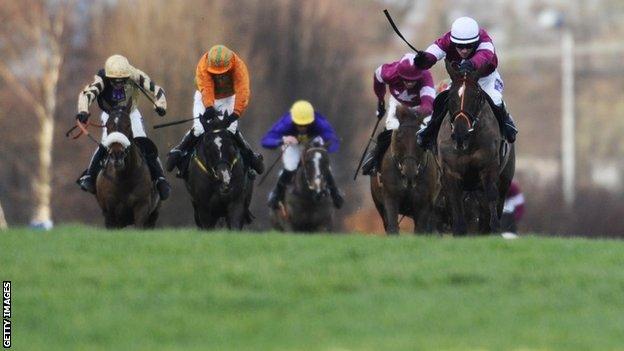 Last Instalment won the Irish Hennessy at Leopardstown and is now fourth favourite for next month's Cheltenham Gold Cup.

The nine-year-old only returned last month after being off since February 2012, and caused a minor surprise by landing the three-mile Grade One race.

An 8-1 chance, trained by Philip Fenton, Last Instalment powered home in the hands of Brian O'Connell.

Bookmakers reacted to the victory by cutting Last Instalment's Gold Cup odds to about 10-1 from 40s, behind Bobs Worth, Silviniaco Conti and Cue Card.

Fenton said: "The ground would be a concern in the Gold Cup as there's a big chance it would dry up. We'd be happy to see rainfall.

"I'm hoping there's still a pinch of improvement to come. It's happy times."

But Last Instalment galloped on to score by eight and a half lengths from the 13-year-old Tidal Bay, with First Lieutenant in third.