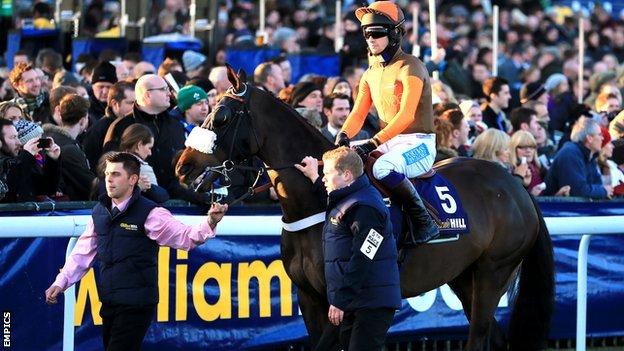 The 2011 Cheltenham Gold Cup winner Long Run won his first race for over a year when successful at Kelso ahead of a tilt at the Grand National in April.

The 2-5 favourite was asked to assert at the second last but Knockara Beau refused to go away quietly.

They jumped the last almost in unison, but Long Run pulled clear to win.

The two-time King George VI Chase winner had dropped down in class to run in the Ivan Straker Memorial Chase at the Scottish track.

The Class Two race over three-and-a-quarter miles was chosen ahead of the higher-grade Kempton Park Chase on 22 February.

Long Run had unseated Waley-Cohen at the final fence on his last run when competing for third in the King George at Kempton.

Now aged nine, he memorably saw off Kauto Star and Denman to win the 2011 Gold Cup before finishing third in the two subsequent runnings.

He had never been out of the first three in 26 races before being well beaten at Wetherby (fifth) and Haydock (fourth) earlier this season.

Long Run, who is owned by Waley-Cohen's father Robert, would seek to become the first horse since L'Escargot in 1975 to complete the Gold Cup-National double in the race on 5 April, for which he is rated a 25-1 chance.

As he gets older, it is thought his stamina will come into play in the Aintree contest over more than four miles, where speed is less of a factor than the three-and-a-quarter mile Cheltenham trip.

Waley-Cohen has won three times over the National fences in amateur races. He has also finished second and fourth (on Oscar Time in 2011 and 2013) and fifth (Liberthine - 2007) in the National itself.

The National is a handicap chase, with each horse being allocated a weight according to their previous form.