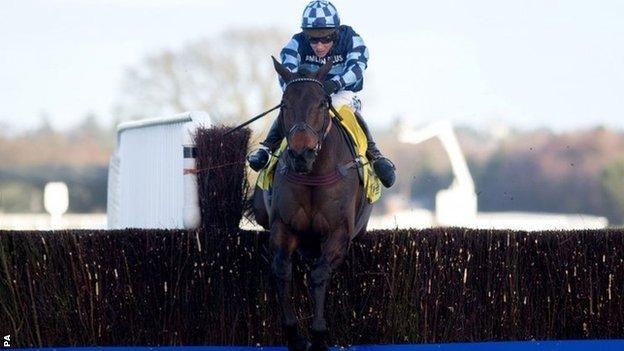 The 8-11 chance, trained by Philip Hobbs, jumped boldly for jockey Richard Johnson to score from Cloudy Too.

Teaforthree is clear favourite for the Grand National in April after finishing a close second to winner Restless Harry in Ascot's three-mile handicap chase.

Melodic Rendezvous, for Jeremy Scott, won the Kingwell Hurdle at Wincanton by half a length from Zarkandar.

The victor remains a contender for the Champion Hurdle, provided the going is soft at next month's Cheltenham Festival.

Un De Sceaux is likely to make the line-up for that race and secured a 16-length win in the Red Mills Trial Hurdle at Gowran Park.

In the Grade One Ascot Chase over two miles, five and a half furlongs, Cloudy Too challenged Kauto Stone for the lead from four furlongs out, but Captain Chris soon swept into the lead and powered clear.

Now aged 10, the gelding won the 2011 Arkle Chase at the Cheltenham Festival but is ideally suited by a right-handed track like Ascot, and was sixth in the 2013 Gold Cup.

Hobbs said: "We're still open-minded about the Gold Cup, but this was exactly his right trip and that was the ideal race."

Rigadin De Beauchene (16-1) won the Grand National Trial at Haydock from stablemate Emperor's Choice in a 1-2 for trainer Venetia Williams, whose horses are thriving in the heavy ground.