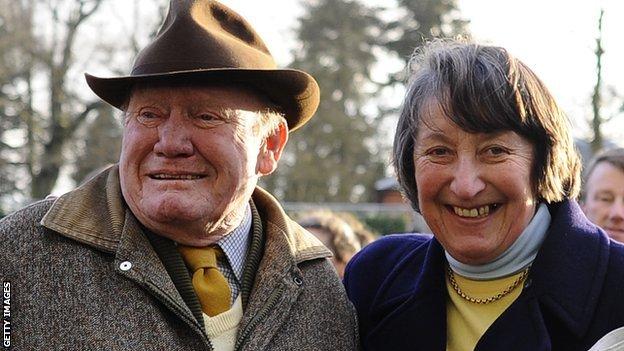 The National Hunt Chase at this year's Cheltenham Festival will be run in honour of the late Terry Biddlecombe, who passed away on 5 January.

The announcement was made at a memorial service held for Biddlecombe at Cheltenham Racecourse on Monday.

The four-mile race for amateurs will be part of Champion's Day on 11 March.

Biddlecombe rode nine winners at the festival as a jockey and, alongside wife Henrietta Knight, trained winning horses Best Mate and Edredon Bleu.

Best Mate won the Cheltenham Gold Cup three times in a row between 2002 and 2004.

The National Hunt Chase is the oldest race at the Cheltenham Festival and has been run 143 times since it was first staged in 1860.

This will not be the first time that a running of the historic race will bear the name of a legendary horse racing figure, with broadcaster Sir Peter O'Sullevan having received a similar honour in 2008.

Speaking of the announcement, Knight said: "It is a great honour that Cheltenham is naming the National Hunt Chase after Terry this year.

"He would have been very touched. Cheltenham always was his favourite racecourse."