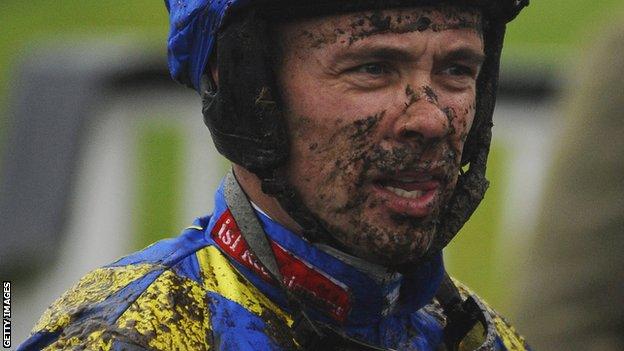 Timmy Murphy has been ruled out of the Cheltenham Festival with a recurrence of a shoulder injury.

The Grand National-winning jockey will need surgery after he suffered a second dislocation in three months in January.

"The only light at the end of the tunnel is that he is going to have an operation," said agent Chris Broad, after the accident at home.

"That's going to rule him out of Cheltenham, unfortunately, but he needs to get it right."

Murphy, 39, has eight winners at the jump-racing festival, which will be held from 11-14 March.

But his season has been marred by injury after he first dislocated his shoulder in an altercation with fellow jockey Dominic Elsworth, which saw him banned for nine days by the British Horseracing Authority.

"I spoke to him on Monday and [the shoulder] is fine, but he needs to address the problem once and for all," added Broad.

The Irish rider won the Grand National at Aintree in 2008 on Comply Or Die, trained by David Pipe.