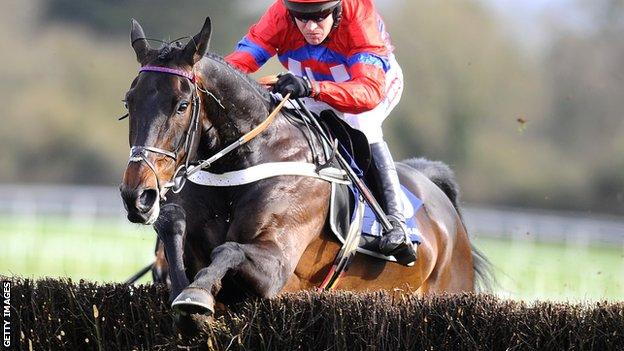 Favourite Sprinter Sacre will not defend the Champion Chase at next month's Cheltenham Festival, trainer Nicky Henderson has told the BBC.

The eight-year-old won the race by 19 lengths at last year's Festival but was pulled up at Kempton on December 27 amid fears of an irregular heartbeat.

Sprinter Sacre's absence from Cheltenham is a major blow to the Festival, but Nicky Henderson and Caroline Mould have quite rightly put their brilliant horse's welfare first. They seem optimistic, in true Terminator-style, that he'll be back, and the whole sport will be hoping so.

The good news is that the Henderson team has a long and distinguished record at getting horses to return from setbacks, though it could be quite a challenge because, more often than not, it's been from leg injuries, where time is a great healer, rather than a situation like this.

Meanwhile, what an intriguing puzzle the Queen Mother Champion Chase has become: it looks wide open not least because Sire De Grugy, the new favourite, has never performed particularly well at the Gloucestershire track.

Henderson said the horse was "missing 10%" on Saturday, and would be rested before a planned return next season.

"He is not showing the same brilliance as he did last season," he added.

"He worked on Saturday over 10 furlongs with [Grand National hope] Triolo D'Alene, and if it had been any other horse you'd have said he worked well, but the Sprinter of last year would have galloped away from Triolo and he didn't," the trainer explained.

Jump racing's star horse was unbeaten in 10 steeplechases before being pulled up at Kempton.

Henderson continued: "Sprinter is a horse that you go woah, woah, woah with, not go, go, go.

"We know this horse backwards and he is missing that 10%, which might be good enough to still win, but he's such a special horse, such a public horse, that [owner] Caroline Mould - who's been very understanding - and me and everyone have decided to miss Cheltenham this time.

"It's terribly disappointing but it's the right thing to do.

"Our job now is to concentrate on getting him back to the Sprinter of old for next season.

"We all know that we could not have had any more ups than last season, or I suppose more downs than this season."