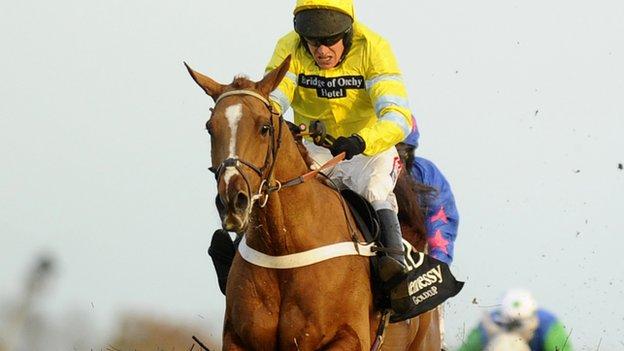 Triolo D'Alene is set to run in the Cheltenham Gold Cup on 14 March after a sparkling workout on Sunday morning, said trainer Nicky Henderson.

The Hennessy Gold Cup-winning horse, who is also a leading contender for the Grand National in April, has entries in several races at the Festival.

"We were delighted with him. He worked really well," said Henderson.

"He's got to go somewhere, and it [the Gold Cup] looks a wide-open race this year."

Triolo D'Alene has also been entered in the Byrne Group Plate and Baylis & Harding Chase at the Festival.

Stablemate Bobs Worth won last year's Gold Cup having claimed the Hennessy earlier in the season, and is the bookmakers' 2-1 favourite to triumph again this year.

Triolo D'Alene was rated about a 25-1 chance for jump racing's blue riband contest before news of his likely run was announced.

He has not raced since his Hennessy triumph, while the Gold Cup will be a first competitive outing for Bobs Worth since winning the Lexus Chase at Leopardstown in December.