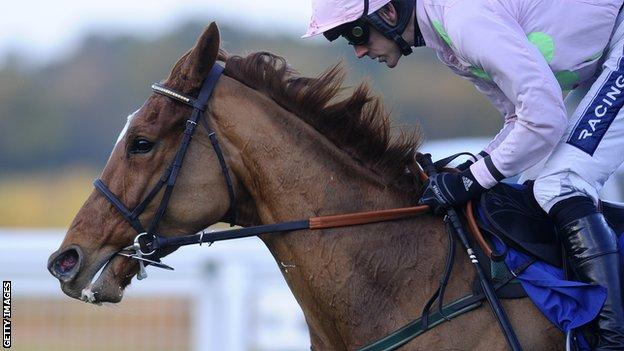 Annie Power has been confirmed as an intended runner in the World Hurdle at the Cheltenham Festival.

Walsh will be up against Big Buck's, on whom he won the race a record four times for Paul Nicholls.

Annie Power also had entries in the Champion Hurdle and Mares' Hurdle, but Mullins has Hurricane Fly and Quevega as respective entries in those races.

But speaking after racing at Leopardstown on Sunday, Mullins said: "All being well, and if everything goes right, Ruby will probably ride Hurricane Fly in the Champion, Quevega in the mares' race and Annie Power in the stayers' (World Hurdle).

"We've had a good chat with the owners and at the moment that's the way it looks, they are all happy on that score."

Annie Power's three outings this season have all come in Britain, with Walsh's partner recording victories at Cheltenham, Ascot and, most recently, at Doncaster.

"Willie has asked my opinion and everything had to be weighed up and we all felt it is the right race for her," said Walsh, who is confident his mount can successfully see out the three-mile trip.

"There are four or five outstanding horses in the Champion Hurdle and maybe two, possibly three, in the World Hurdle."

Triolo D'Alene has also been confirmed as a runner for the Cheltenham Gold Cup on 14 March.

Trainer Nicky Henderson said the Hennessy Gold Cup-winning horse, who is also a leading contender for the Grand National in April, has entries in several races at the Festival.

"We were delighted with him. He worked really well," said Henderson. "He's got to go somewhere, and it [the Gold Cup] looks a wide-open race this year."

Triolo D'Alene has also been entered in the Byrne Group Plate and Baylis & Harding Chase at the Festival.