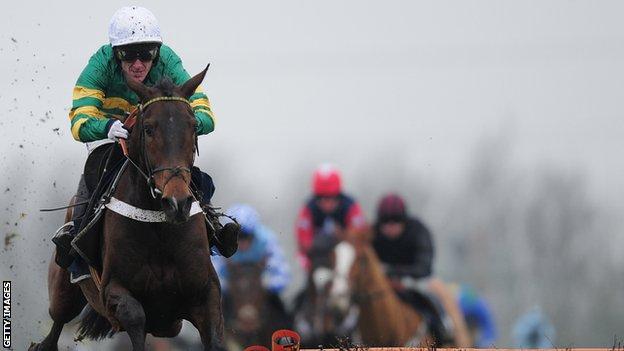 Leading Champion Hurdle contender My Tent Or Yours has suffered an injury scare a week before the big race, but is still expected to run in the Cheltenham contest.

Trainer Nicky Henderson said the 5-1 fourth favourite had suffered a small puncture wound on the sole of a foot.

"He's finished all his work, he galloped on Saturday so I'm not worried work-wise," said Henderson on Tuesday.

"No trainer wants a problem at this stage, though."

Henderson reported the horse to be sounds on Wednesday morning.

Hurricane Fly, trained by Willie Mullins, is 5-2 joint favourite with The New One as he bids to emulate the great Istabraq by winning a third Champion Hurdle on the meeting's opening day (11 March).

My Tent Or Yours warmed up for Cheltenham with victory in a jumpers' bumper flat race at Kempton, having narrowly beaten The New One on Boxing Day.