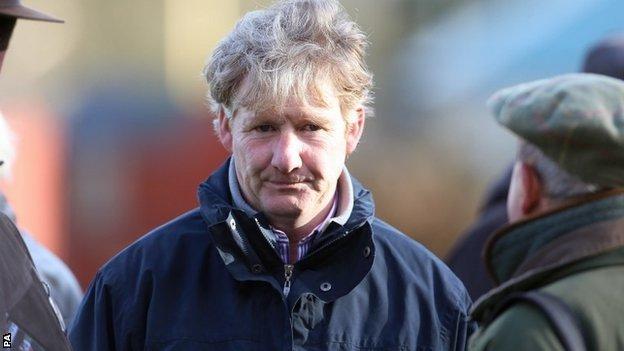 The British Horseracing Authority (BHA) says they passed dope tests carried out at his Tipperary stables a week ago.

Fenton faces a court hearing after being charged with possessing banned substances including anabolic steroids.

Blood and hair samples were taken from the horses before next week's showpiece jump racing meeting.

The banned substances were allegedly found by the Irish Department of Agriculture in January 2012.

"The BHA was always walking a tightrope on this one, and neither decision was going to be comfortable.

"Stop Fenton's horses from running, and accusations of pre-judging an ongoing criminal case would certainly have flown around, followed possibly by a courtroom encounter with Last Instalment's owner Michael O'Leary.

"Let them take part, and the 'spectre' of drugs hangs over jump racing's greatest event, inevitably diverting attention from the action.

"The Authority took the unprecedented step of testing the Fenton entries in order to 'maintain the integrity of, and ensure public confidence in, the relevant races'. Whether it has achieved this will be as big a topic of chat next week as the races themselves."

Fenton's case, where he faces eight charges of possessing banned animal remedies, has twice been adjourned and is next listed for a district court on 20 March, six days after the Gold Cup.

The BHA says its investigation found no evidence that Fenton's Cheltenham contenders, which also include Dunguib (Coral Cup) and Value At Risk (Champion Bumper), have been administered with anabolic steroids.

Officials have interviewed the trainer, liaised with the Irish Turf Club and looked at the location and testing histories of the horses.

BHA chief executive Paul Bittar said: "The priority was to obtain all available information to inform our decision as to whether there was a justified and justifiable concern that any of the horses trained by Fenton had been administered with anabolic steroids.

"The findings of this investigation have not given us a reason to believe that any of the Fenton-trained horses entered for Cheltenham have been administered with performance-enhancing substances.

"Therefore there was no basis, legal or otherwise, on which to prevent the horses from running."

Eddie O'Leary, spokesman for his brother, the Ryanair boss Michael, who owns Last Instalment, suggested the horse may not run if the ground dries out despite being 5-1 third favourite.

"What we hope now is that this has cleared everything up," said Eddie, racing manager for Gigginstown House Stud.

"This horse will not run unless the ground is soft. There is a bit of rain forecast next week and we're hoping it materialises."

Stablemate The Tullow Tank, whose owner Barry Connell decided not to send the horse to the Festival, also passed a dope test.