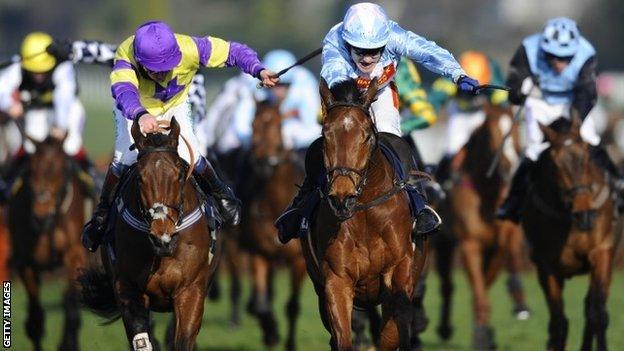 Baltimore Rock held off a strong challenge from Gassin Golf to win the Imperial Cup by a length at Sandown.

The Tom Scudamore-ridden 7-1 shot was a third success in the handicap hurdle for trainer David Pipe, adding to the six victories for his father Martin.

Baltimore Rock will secure a £100,000 bonus from sponsors if he wins at next week's Cheltenham Festival.

"We always thought he was better than he showed but when Tom schooled him in his latest piece of work, he jumped the best we've ever seen.

"He had to improve on the bare form but he's a handicapper's nightmare because he only just does enough."

Baltimore Rock is entered in the Vincent O'Brien County Hurdle at Cheltenham, and is rated an 8-1 chance with Imperial Cup sponsors William Hill for that contest.

However, Pipe is not certain his charge will make the cut, regardless of the penalty he incurs for winning at Sandown.

He said: "He travels well but I'm not sure he will get in. We will enter him and see and it will be disappointing if he doesn't."