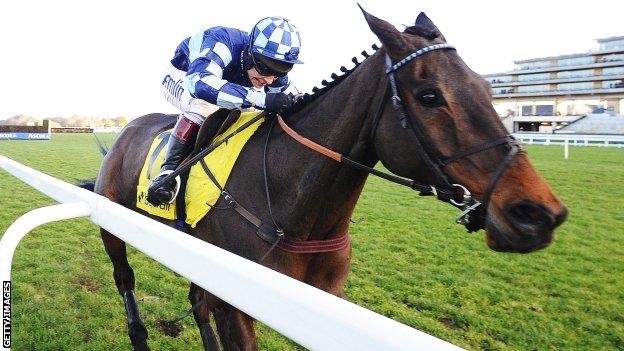 Captain Chris will miss Friday's Cheltenham Gold Cup and the rest of the season with a leg ligament injury.

The 10-year-old, who was a 14-1 chance, won at Kempton and Ascot after an encouraging third-place finish in the Peterborough Chase at Huntingdon.

"He has a suspensory problem and won't run again this season," said trainer Philip Hobbs.

Meanwhile, champion jockey AP McCoy has been given the ride on Nicky Henderson's Triolo D'Alene.

The Paul Nicholls-trained Rocky Creek was ruled out of the race on Saturday as he is suffering from ringworm.

Richard Johnson was due to ride Captain Chris, who finished sixth 12 months ago at steeplechasing's blue riband race at Cheltenham.

The Willie Mullins-trained On His Own, twice a winner this season, has been supplemented for the Gold Cup at a cost of £27,500.

The 10-year-old, owned by Graham Wylie, has won the Thyestes Chase and Bobbyjo Chase this year, and Mullins said after the latter he "could win a really good race".

Eight-year-old Rocky Creek, who was about a 25-1 chance, was runner-up in the Hennessy Gold Cup and Argento Chase in his two outings so far this season.

He will now be aimed at the Grand National at Aintree next month after a "hugely frustrating" setback for trainer Nicholls.

It is just incredibly disappointing

"I have had one or two horses that have suffered from ringworm this season... and it is just a random problem that pops up occasionally," he wrote in his Betfair blog.

"It is just incredibly disappointing that it has happened to a high-profile horse before a big race this time."

Nicholls originally suspected Rocky Creek had "heat lumps" but "about a quarter of his body is now affected" by ringworm.

He added: "It is highly contagious, so we have to be very careful, but we can manage that.

"I thought he was going to Cheltenham with a live outside chance in the Gold Cup, but it is not an injury as such and we still have a big target to aim him at this season."