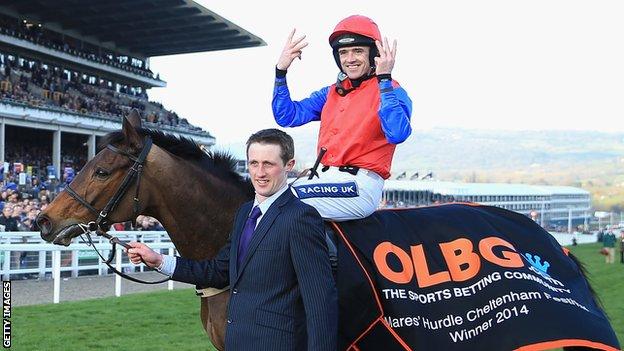 Quevega set a new Cheltenham Festival record as she raced to a stirring sixth consecutive victory in the OLBG Mares' Hurdle.

The 10-year-old triumphed amid resounding cheers as jockey Ruby Walsh guided her to a three-quarter length success over her Willie Mullins stablemate Glens Melody.

Victory for Quevega, whose last defeat came in May 2009, meant she passed Golden Miller's mark of five Gold Cup wins in the 1930s.

"I'm so pleased for her and she has her own place in history now. To get a horse here for six years in a row is enough," said Irish champion trainer Mullins.

Walsh, the all-time leading Festival rider who was clocking up his 40th win at the meeting, bore a wide smile as he returned to jubilant scenes in the winners' enclosure.

"Quevega's winning performance was amongst the most astonishing ever seen in the history of the Cheltenham Festival.

"The mare looked to be definitely beaten at the final flight of hurdles, but her strength and grit combined with Ruby Walsh's long-applauded brilliance in the saddle saw them home.

"It was fabulous, slow-motion-stuff through the final few yards which every true fan of great horses and jockeys will have lived, alongside Quevega and Walsh. Indeed it may well have attracted some new converts.

"Will she back for another go in 12 months' time to try to break her own record? I am one of thousands who hope so."

"She's a great little mare. The good ones are all tough," said Walsh, 34, who is 11 career wins clear of his nearest Festival riding rivals, Tony McCoy and Barry Geraghty.

The 8-11 favourite Quevega was made to work hard by Glens Melody until getting her head in front in the final 100 yards.

But Walsh had the luxury of easing down in the last few strides as he savoured a landmark win.

Glens Melody was beaten three-quarters of a length, with L'Unique the same distance back in third.

Last year's runner-up Sirene D'Ainay made the running until she came down at the second-last flight.

French-bred Quevega has run only twice in each of the last four years - at the Cheltenham and Punchestown festivals - but has won every time.

"She's just something else and the mare did the talking today," said County Carlow-based Mullins, who was taking his own Festival tally to 41 following the opening Supreme Novices' Hurdle win with Vautour.

"She's got stamina, speed and everything, she's just class - what more can I say?

"The breeder told me when she was five that that she would get better with age and that her mother wasn't at her best until she was nine.

"We might be greedy to try number seven next year, we'll go home and have a drink and a think."

Quevega's trainer Willie Mullins, speaking to BBC Radio 5 live: "I thought we were in the wrong position the whole race, but Ruby is a genius and obviously had a plan in his head. It was an absolute joy to see her put her head down and win and she has her own unique place in history."

It gave Walsh a second winner of the day after he rode Vautour to victory in the opening race of the meeting, the Supreme Novices' Hurdle, from 7-2 joint favourite.

"It's way up there with all of my Festival winners," he said after the mares' race.

"I love Quevega and that was one of our missions coming here - trying to get Hurricane Fly across the line didn't work - but to get her there, I am happy now for the week.

"We set about riding Hurricane Fly more positively this year and maybe it backfired. Maybe it was age, I don't know. He seems fine afterwards.

"I was disappointed with Hurricane Fly but everything else from here on this week is a bonus. I'm more than happy to have won what we have."

Walsh was puzzled by the Champion Hurdle performance, with his mount travelling well before being passed up the hill by younger rivals.

The jockey was narrowly denied another winner when 33-1 shot Western Warhorse, ridden by Tom Scudamore for trainer David Pipe, pipped Champagne Fever on the line in the Arkle Chase.

"Second is nowhere," said Walsh, who has been the week's leading rider at six of the last eight Cheltenham Festivals.

Richie McLernon produced one of the rides of the day to win the Handicap Chase with Holywell holding off Ma Filleule and The Package.

There was a stewards' enquiry in the final race of the day - the Novices' Handicap Chase. Present View, ridden by Brendan Powell, was first past the post and the result stood despite the winner veering across the track and shutting the gap on second-placed Ataglance.