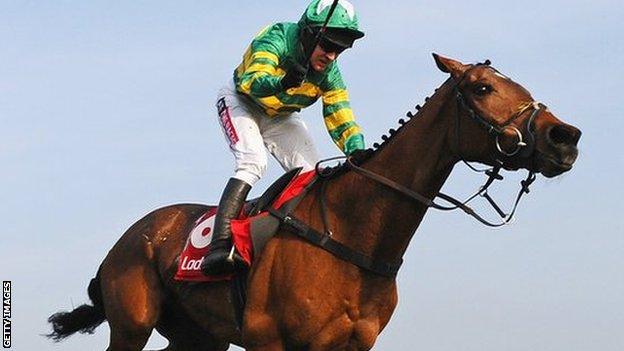 More of That condemned Annie Power to her first ever defeat as Barry Geraghty's ride beat the Irish trained mare into second in the World Hurdle.

Four-time winner Big Buck's finished fifth and was retired immediately after the race.

Despite being billed as a two-horse race, it was Jonjo O'Neill's More of That who won from 15-2.

"Annie Power stayed well enough but just got beaten by the better horse on the day. Annie was very tough, ran her race, but was just beaten."

He beat 11-8 favourite Annie Power by a length for a fifth consecutive career win, with At Fisher's Cross third.

Eleven-year-old Big Buck's, who won this race every year from 2009 to 2012 before missing last season through injury, was never in the contest.

Commenting on his retirement, trainer Paul Nicholls said: "It's the obvious thing to do. I wouldn't ask him to run again - he's been a wonderful horse.

"Halfway round I could see he wasn't jumping so fluently and his legs weren't what they were.

"It's not an emotional decision - I'm delighted he's finished in one piece. It's the right decision at the right time and I'm thrilled. He's just been wonderful."

"Now 11, he's clearly returned from injury without being the force of old, a force that led him to quite simply tower over all-comers over a four-year period.

"And the presence of Big Buck's in this division, having unseated his rider when in contention for the 2008 Hennessy Gold Cup (steeplechase) - if he'd won, things might have been very different - did masses for the World Hurdle too.

"Once mainly a purists' prize, it took time to get going as a stand-alone feature of a whole afternoon when the Festival went to four days in 2006.

"But the run of success and superiority of the four-time champion gave something for people to latch onto, and it helped to put the race on the map."

At Fishers Cross, with AP McCoy at the mount, made the first burst for home in the three miler before Annie Power, under Ruby Walsh, and Geraghty's More of That burst through.

But it was the latter who prevailed to follow up his Grade 2 win at the Osborne House Relkeel Hurdle in Cheltenham in December.

Victorious jockey Geraghty said: "He still is a little bit innocent but he's got an engine. I always felt I had the finish."

"It was a good, fair race," he said. "I thought we jumped fantastically the whole way, but we were just beaten by a better horse on the day."

Earlier, McCoy claimed his first win of the Festival when he rode 7/1 shot Taquin De Seuil to the JLT Novices' Chase despite a back injury.

McCoy was limping before and after the race after falling on Goodwood Mirage on Thursday but the lure of become a winner was too much to pull out.

"But I felt if I managed myself right I could get through it. However sore I feel now I would have felt a lot worse watching someone else win this."

The closest finish of the week came in the Pertempts Network Final as Fingal Bay beat Southfield Theatre after a lengthy photo-finish decision.

Tom Scudamore was a popular winner for 3-1 favourite in the Ryanair Chase as he burst through late with Dynaste, including a fine leap on the final fence.

Ballynagour gave Scudamore another victory in the Byrne Group Plate with the biggest win of the week by around seven lengths from McCoy's Colour Squadron.

JT suffered a fall in the Fulke Walwyn Kim Muir Challenge Cup which left him paralysed. He was thought to be following coverage of the race from a spinal injuries unit in Southport.