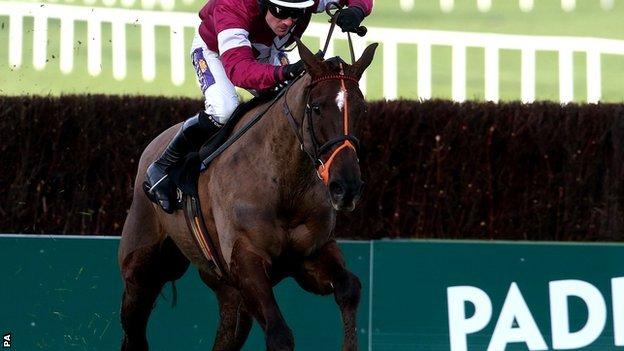 Third favourite Last Instalment has been left in the line-up for Friday's Cheltenham Gold Cup by Irish trainer Philip Fenton, who is the subject of a drugs investigation.

His Irish Hennessy Gold Cup winner was one of 14 runners declared for the race, with last year's victor Bobs Worth the current bookmakers' favourite ahead of Silviniaco Conti.

Last Instalment was cleared to run after passing dope tests carried out by the British Horseracing Authority at Fenton's Tipperary stables.

However, the nine-year-old gelding - owned by Gigginstown House Stud which is headed by Ryanair boss Michael O'Leary - may not take part if the ground continues to dry out.

Fenton has been charged with possessing banned substances, including anabolic steroids, following an Irish Department of Agriculture inspection at his yard in January 2012.

The trainer, who is expected to deny any wrongdoing, is due to appear at a district court six days after the Gold Cup.