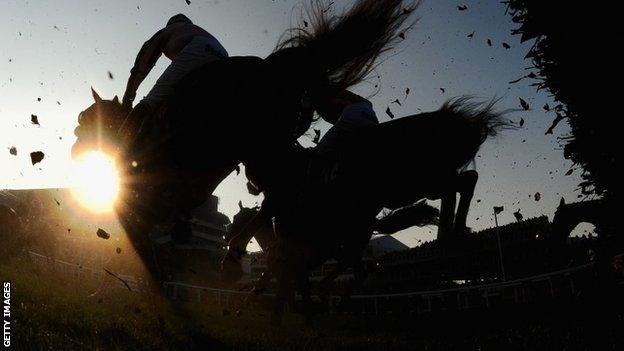 Raya Star became the fourth horse to be put down at the Cheltenham Festival after suffering serious injury in the Grand Annual on Friday.

The British Horseracing Authority tweeted: "Sad to confirm Raya Star, after assessment by vets, was humanely put down due to suspected fractured spine."

Akdam and Stack The Deck were euthanised after suffering injuries on day two of Cheltenham, following the death of Our Conor on the Festival's opening day.

Raya Star was trained by Alan King and owned by Simon Munir. The eight-year-old had won on seven of 22 starts.

Earlier in the four-day meeting, Bryan Cooper - riding Clarcam in the Handicap Hurdle - sustained a broken leg in the same incident in which Akdam fractured a foreleg.

The 21-year-old rider went to hospital, but his mount was not badly injured.

Stack The Deck pulled up lame in Wednesday's last race - the Champion Bumper - with a fractured left foreknee.

The Champion Bumper is a flat race run under National Hunt rules.

The British Horseracing Authority stated that "the decision was taken to humanely put the horse down" after being assessed.

The deaths of Akdam and Stack The Deck come after Our Conor, who won the Triumph Hurdle at last year's Festival, was killed following a heavy fall in Tuesday's feature race, the Champion Hurdle.

More than 450 horses raced over the four days of the Festival.

BHA spokesman Robin Mounsey said after Our Conor's death: "Everyone in the sport of racing regrets the loss of a horse, especially those who are close to the horses in question. The welfare of horses and riders is of paramount importance.

"Despite the best efforts of all involved, as with participation in any sport involving speed and athleticism, there remains an inherent risk of injury.

"British racing is open and transparent about the risks involved to both horse and rider. Over the last 15 years, the equine fatality rate in British racing has fallen by one-third, from 0.3% to 0.2% of runners."

Cooper, who has been tipped as a future Irish champion jockey, will now miss several high-profile rides. He also broke a leg last May and was out of action for five months.

Akdam had won three of his previous 11 races for Worcestershire trainer Tony Carroll, including a victory at Fakenham in January.

Stack The Deck, trained by Peter Fahey in Ireland, had one win, a triumph in Limerick in December, from three previous outings.