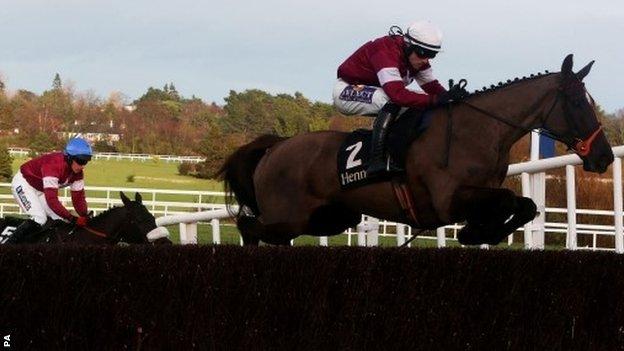 Owner Michael O'Leary says he is "very comfortable" with the prospect of Last Instalment running in Friday's Cheltenham Gold Cup - despite a drugs inquiry.

He said a decision on his participation hinges on the ground conditions and would be made on the day of the race.

"People are desperate to make a controversy out of nothing," Ryanair boss O'Leary told BBC Sport.

Fenton's case has been listed for a district court in Ireland six days after the Gold Cup, and he is expected to deny any wrongdoing.

He was charged following a Department of Agriculture inspection at his Tipperary stables in January 2012, although details have only emerged publicly in recent weeks.

O'Leary, who owns the Gigginstown House Stud which has a string of top jump-racing horses at various stables in Ireland, said Fenton has his backing.

"The basis of any judgement system in the UK or Ireland is that you are innocent until proven otherwise," he said.

"The horse is fit and well, he has been tested every time he has run, including recently when winning the Hennessy at Leopardstown, so let him run.

"But I do think there is a lesson to be learned for the Irish authorities in future and that is if an issue arises, it should be dealt with promptly like they do over here.

"It shouldn't be hanging over everybody, including the owners, two years later."

One of Fenton's other Cheltenham possibles, The Tullow Tank, did not travel after owner Barry Connell decided not to run with a drugs controversy in the background.

When asked if he was happy that Last Instalment could line up in the showpiece race, O'Leary replied: "I'm very comfortable with it.

"The issue with Philip is more than two years old. It should have been prosecuted long before now.

"I don't think it should affect the horse or the owner of the horse two years after the incident. The horse has been frequently tested, and was tested by the BHA at our request a couple of weeks ago, and he's passed all those tests."

2013: Bobs Worth, ridden by Barry Geraghty

Last Instalment is a lightly-raced nine-year-old who scored some significant victories in the 2011-12 season before being off the track for two years with leg problems.

He was third on his return at Thurles before triumphing in last month's Irish Hennessy Gold Cup.

"We'll have a look at the ground on Friday morning. As long as the ground is safe we'll run. It depends on the ground," added O'Leary.

"He's nine. It's unlikely he'll survive another season. Any day he runs is probably a bonus at this stage.

"Philip's done a remarkable job to get him back this year but he's been out of training for two years and each of his two front two legs have suffered tendon problems.

"If the ground isn't safe, we won't risk him because the horse has two glass legs, so safety first."

With no rain at the track in the 10 days up to Thursday, much of the course has been watered in an effort to maintain ground officially described as good, good to soft in places.

A total of 14 runners have been declared for the Gold Cup, headed by last year's winner Bobs Worth.