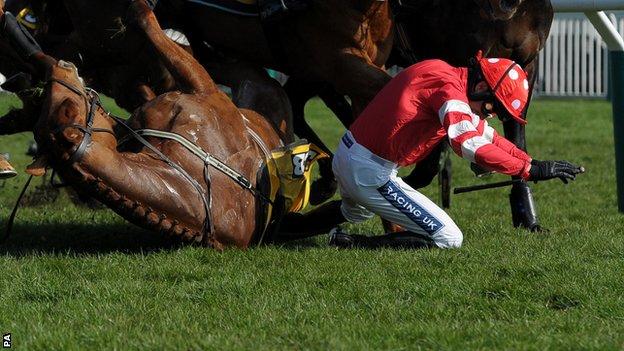 Ruby Walsh is a serious doubt for the Grand National after his Cheltenham Festival was ended prematurely when he suffered a compound fracture to his right arm.

Riding Abbyssial, the Irish jockey fell midway through the JCB Triumph Hurdle and was then hit by Adriana Des Mottes.

The 34-year-old was taken to hospital and is unlikely to recover for the Aintree showpiece on 5 April.

The 14:40 GMT Novices' Hurdle race was delayed by nearly 15 minutes after Jacob, due to ride Port Melon, was launched off his horse as he cantered to the start, falling into concrete behind the railings.

He was taken to an ambulance on a stretcher after lengthy treatment at the course and was later diagnosed with a broken knee, leg and elbow.

Paul Nicholls, the trainer of Port Melon, said he spoke to Jacob by phone from hospital.

"He's broken his knee and will be operated on tomorrow. It's not great news," said Somerset-based trainer Nicholls. "The incident looked horrific, but I haven't spoken to him about that yet."

Port Melon did not appear to be seriously hurt in the incident.

It completed a luckless Festival for the Irishman who was in tears after being pipped on the line by Fingal Bay while riding Southfield Theatre in the Pertemps Hurdle on Thursday.

But he emerged victorious in the Vincent O'Brien County Handicap Hurdle on Friday, riding Lac Fontana to victory, before his week was ended in dramatic fashion.

It gave seven-time champion trainer Paul Nicholls a first win of the meeting in 22 attempts.

Walsh, the Festival's all-time leading jockey, has 41 career wins at the meeting, and has been leading jockey in six of the last eight years.

"He has a compound fracture of his right humerus. He has been taken to Gloucester for surgery," confirmed a racecourse spokesman.

Walsh was due to ride three more horses on the final day of the Festival, including On His Own in the Gold Cup. Replacement Paul Townend then injured his shoulder.

David Casey was handed the rides on Briar Hill in the Albert Bartlett Novices' Hurdle and On His Own in the Gold Cup.

Meanwhile, jockey Chris Timmons was replaced by Peter Buchanan in the opening race on Achtung after failing a breath test.

Jacob's injury meant the later races were delayed with JJ Smyth riding Tammys Hill to victory in the CGA Foxhunter Chase (15-2), three lengths ahead of Carsonstown Boy who was long-odds 40-1 in second place.