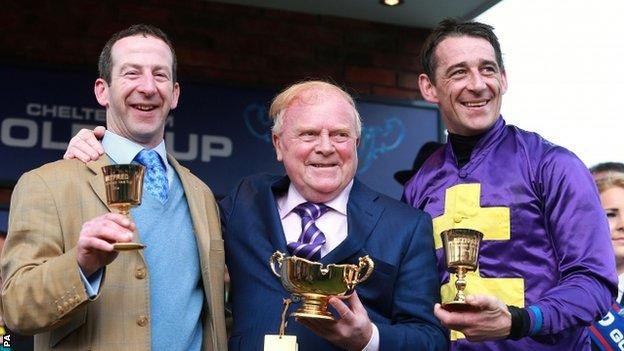 Drama, drugs, injuries, intrigue, suspense, redemption and triumph. The 2014 Cheltenham Gold Cup was the race that had nearly everything on the day that had even more.

Ten years on from the landmark third Gold Cup victory of Best Mate, his jockey Jim Culloty was on the winner's rostrum, lifting the coveted little trophy as the trainer of Lord Windermere.

The race was a rite of passage itself - a delayed start, pulsating finish and dramatic run-in which saw the main contenders veer to the right up the Cheltenham hill, leading to a stewards' inquiry where the result remained uncertain for 15 minutes before being confirmed.

Away from the celebrations, jockeys Ruby Walsh and Daryl Jacob lay in hospital with broken bones, and the death of racehorse Raya Star in the final race was the fourth equine fatality of the meeting.

Jacob has breaks in his leg, knee and elbow after a freak incident where his horse Port Melon crashed through the running rail and threw him to the ground while cantering to the start of the race before the Gold Cup, the Albert Bartlett Novices' Hurdle.

It was an incident seen close up by a large group of spectators in an area of the course, named in honour of Best Mate. Within an hour, they would witness more drama.

The build-up to Gold Cup day had been coloured by controversy with Last Instalment running in the race despite his trainer Philip Fenton facing a drugs inquiry.

It proved to be the horse's last competitive outing as he was retired by aviation boss Michael O'Leary, of owners Gigginstown House Stud, after being pulled up in the feature race.

As the leading protagonists ran up the hill following 22 fences and more than three miles, one of the contest's most dramatic denouements unfolded.

The 2013 champion Bobs Worth, ridden by Barry Geraghty, became unbalanced on one side of the track, while second favourite Silviniaco Conti veered to the right of the three horses who would fill the places.

Geraghty said afterwards: "He just spotted one of the yellow jackets [of security staff] and ducked way from it, but it cost us nothing."

Russell, buoyed by a win earlier in the day, urged his 20-1 shot forward. Late substitute David Casey tried to propel eventual second On His Own through a middle path inside The Giant Bolster, who finished third.

A photo finish and the subsequent inquiry gave Russell the nod, despite Casey's protestations that he would have won with a straight run and no interference from the winner.

"Silviniaco Conti veered over and he got a bit startled, but obviously I was on the best horse in the race," said Russell of Lord Windermere who was unconsidered by many despite winning the RSA Chase at last year's Festival.

Casey was less convinced on a day where he began as the rider of one Gold Cup horse First Lieutenant (later withdrawn) and ended on the unlucky runner-up, after Walsh suffered a broken arm in a fall and his first replacement Paul Townend picked up a shoulder injury.

Culloty admitted afterwards he had experienced some low times as a trainer since being forced to quit the saddle after a succession of injuries and concussion problems.

There were whispered suggestions from some within racing that he might not be up to the task, and advice from others, including seven-time champion trainer Paul Nicholls, has helped revive his fortunes.

"This was so unbelievable that I almost expected to lose the race," said the 40-year-old from Cork after relieved embraces when the inquiry result went in his favour.

"They were the worst few minutes of my life."

Victory came a decade on from his third win with Best Mate, trained by Henrietta Knight with the assistance of Terry Biddlecombe, the former champion jump jockey who died in January.

"After the RSA Chase last year, I asked Davy if he would be available for the Friday of Cheltenham next year, " said Lambe.

"People are still assessing how this year's Gold Cup goes down in terms of quality, but in terms of drama it was simply extraordinary.

"As though the string of earlier spills, which left several jockeys in hospital, plus two big-race false starts weren't enough, Lord Windermere appeared from practically nowhere to grab the spoils very, very late.

"A lengthy stewards' inquiry at Hexham on a Tuesday is tense enough, but after argy-bargy towards the end of the ultimate race of the jumps season it is virtually unbearable.

"Some said it hung in the balance for those long minutes, but others that it would take a brave set of officials to change such an important result, and it wasn't changed.

"Now, the planning to bring Lord Windermere back in 2015 to defend his crown will begin. It's hard, as members of the Bobs Worth team (5th) found out, and they also know it's even harder to regain after loss. Only Kauto Star has ever done that."

"I thought we were going skiing," came back Russell's jokey reply on the Friday in question.

Russell, 34, had a nightmare end to 2013 as he lost the plum role after several years as Gigginstown's retained rider to 21-year-old Bryan Cooper. He was privately devastated by the decision, but kept his counsel and knuckled down.

"It's an ill wind that doesn't blow you away," he said in his own measured Cork lilt.

"It's a lesson for anyone in life. You keep your mouth shut and move on.

"Jim kept saying to me about Lord Windermere - 'Wait for Cheltenham' and how right he was. It's seventh heaven."

The redemption was complete when Russell, who still has some rides for O'Leary, won the final race on Savello, decked in Gigginstown colours and waving his whip in the air as he crossed the finishing line.

It completed a treble for the jockey, and was a fourth win of the day for the Ryanair boss at combined odds of 82,653-1.

The powerful owner sacked Russell when he took him aside for a cuppa at Punchestown races.

During a later Q&A on the RTE television channel, the rider was asked by a viewer to offer advice to an up-and-coming jockey.

The 2014 Cheltenham Gold Cup sure was an extraordinary brew.