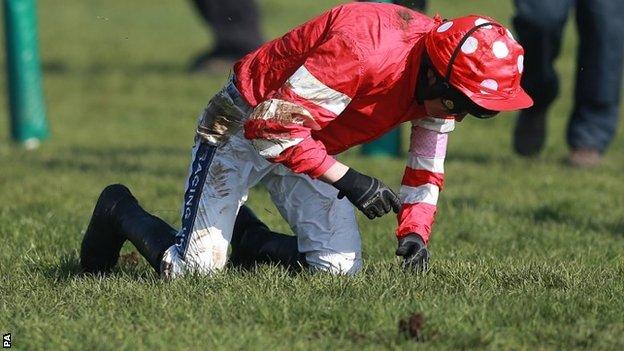 Jockey Ruby Walsh will miss the Grand National and the Punchestown Festival after having surgery on the broken arm he sustained at Cheltenham on Friday.

The 34-year-old suffered a compound fracture to his right arm after falling while riding Abbyssial in the JCB Triumph Hurdle, and was then hit by Adriana Des Mottes.

The Grand National is on 5 April.

The Punchestown Festival follows from 29 April to 3 May and Walsh, who has two previous Grand National winners in Papillon (2000) and Hedgehunter (2005), is hoping to return to the saddle later in the year.

"I knew the minute I hit the deck I was in serious trouble and it was no surprise that I had done plenty of damage," said Walsh.

"I am far from disheartened, however, and have no doubt I will dust myself down and go again in the not too distant future."

Ireland's champion jockey enjoyed a fantastic Festival before his fall, with victories aboard Faugheen (Neptune), Vautour (Supreme) and Quevega, who claimed a record-breaking sixth consecutive triumph in the Mares' Hurdle.

He also rode Arkle runner-up Champagne Fever, and is looking forward to being aboard the seven-year-old, who is trained by Willie Mullins, in the King George VI Chase at Kempton on Boxing Day.

"I was absolutely delighted with Champagne Fever," Walsh added. "Four days later, I am still trying to fathom how he managed to get beaten.

"I'd imagine Willie (Mullins) will run him over two miles at Punchestown and then he will be stepped up in trip next season.

"He has always been viewed as a potential Gold Cup horse in Willie's yard and I see it that way as well. But I would also love to ride him in the King George next Christmas."

Walsh's fellow jockey Daryl Jacob also suffered three broken bones in a freak accident on the Festival's final day. The 14:40 GMT Novices' Hurdle race was delayed by nearly 15 minutes after Jacob, due to ride Port Melon, was thrown from his horse as he cantered to the start, falling into concrete behind the railings.

He was taken to an ambulance on a stretcher after lengthy treatment at the course and was later diagnosed with a broken knee, leg and elbow.

Meanwhile, Bryan Cooper, who suffered a broken leg after Clarcam fell in the Fred Winter Juvenile Handicap Hurdle at Cheltenham on Wednesday, has had successful surgery.

Dr McGoldrick added: "The operation required internal, rather than external, fixation. This will help him a great deal, mobility wise.

"He has lost some skin as he had to have a skin graft, so the next week is going to be very critical. All being well, he should be home in a week to 10 days.

"It is going to be prolonged, but there is no reason why he will not make a full recovery."