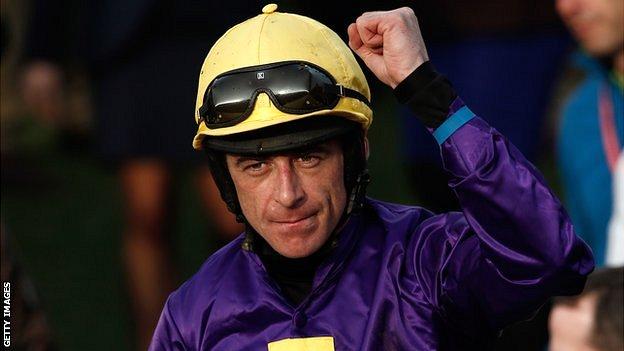 Russell's 20-1 shot, trained by Jim Culloty, beat On His Own in a photo finish.

Stewards admitted the runner-up was impeded, but after a 15-minute hearing they ruled it was "minor interference" that did not affect the result.

On His Own was beaten a short head, with The Giant Bolster third.

On His Own's trainer Willie Mullins had initially indicated an appeal might be considered, although the horse's owners have now decided against doing so.

Russell, 34, said he was in no doubt the result was correct, although On His Own's rider David Casey believed the places should have been reversed.

The winning rider said Lord Windermere edged towards On His Own when he saw Silviniaco Conti, who finished fourth, veering right in their direction up the Cheltenham hill.

"Obviously, I was on the best horse. He's a confidence horse, and shied away a little bit," said the jockey, who rode a 3,926-1 treble on Friday.

"David Casey felt he was intimated a bit, but he was never going to pass me."

Casey, who began the day as jockey of First Lieutenant before that horse was withdrawn, narrowly missed out after a canny front-running ride on his mount, who faded briefly before rallying up the hill.

He told a dramatic stewards' inquiry: "I felt at the time I was going to get up on top with a straight run. I felt all the way up the straight I was being impeded."

The runner-up's owner Graham Wylie, who supplemented the horse for the race, said he was not downhearted.

"I'm not at all disappointed, just proud of the horse. He did better than we expected," he said.

Some observers felt the result might have been overturned if it had been in a less-high profile contest than the blue riband event of jump racing.

"As the winner has gone for home up the run-in, he has stayed straight for a large part and then started to shift right into the whip [of the rival jockey].

"In doing so, he moved across and onto the second and caused minor interference to the third.

"We looked at how the horses were going at the time, listened to the jockeys' evidence and on balance we did not think the minor interference had cost the second the race. If we have any doubt, the doubt goes to the horse in front."

"Regardless of the season and the things that have happened to me, I have gone through three days at Cheltenham, with two or three falls, and ridden very poorly on some occasions with little confidence," he said.

Asked what his approach had been after losing the Gigginstown job, Russell admitted to feeling very disappointed for a few days before saying: "It happened. It was done, and it was over."

Culloty, triumphant as a trainer 10 years on from riding Best Mate to a third Gold Cup victory, said the stable had thrived since looking at every aspect of the operation.

"I was quite low at one point and wondered whether I could actually do this job," said the 40-year-old.

"We tried to change everything; routine, feed, gallops but we found out it was a fungus problem. As soon as that was sorted, we've never looked back."