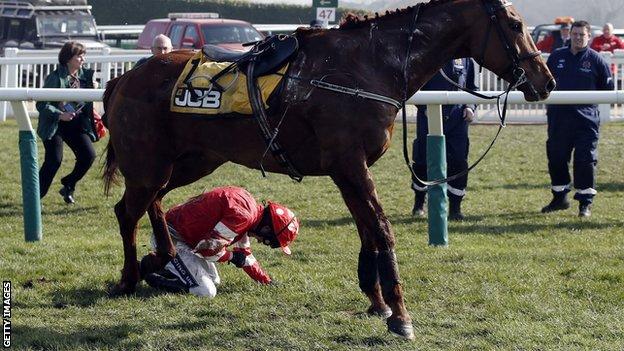 Ruby Walsh will see a specialist after breaking his arm and dislocating a shoulder in a heavy fall at the Cheltenham Festival on Friday.

Riding Abbyssial, the Irishman fell midway through the JCB Triumph Hurdle and was then hit by Adriana Des Mottes.

"I need to wait for the swelling to go down before they can get a clearer picture," said Walsh, 34.

The Festival's leading jockey has already been ruled out of the Grand National on 5 April.

Walsh told Racing UK: "I've been worse - I'm not too bad. I had an operation on Friday night in Gloucester to put my shoulder back into its socket.

"There was a fracture at the top of my arm as well."

Asked whether he will be out for the remainder of the National Hunt season, the jockey added: "I don't know. I would have thought so, but I'll know more when I see a specialist later in the week."

Daryl Jacob suffered three broken bones at Cheltenham when launched off his ride Port Melon as he cantered to the start of the Novices' Hurdle on Friday, falling into concrete behind the railings.

Meanwhile, Jason Maguire has been brought out of an induced coma after he had part of his liver removed following a fall at Stratford on 10 March.

The Grand National-winning jockey was kicked in the stomach by another horse after he was unseated from Scots Gaelic.