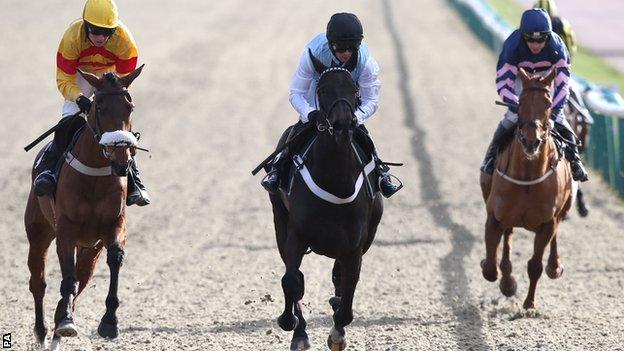 Jockey Martin Harley has been discharged from hospital after a fall at Lingfield in which he fractured four ribs and a bone in his neck.

Harley is likely to wear a neck brace for about six weeks, but could return to action in May.

Struthers said the jockey, one of several high-profile riders to suffer bad injuries in March, had been walking around since the fall.

"Martin has fractured a vertebra in his neck though it's stable and wasn't displaced so doesn't need an operation but he will be in a collar for six weeks," he said.

"When you looked at his fall you wouldn't have been surprised if his injuries had been far more serious than they are. It was as bad a fall as you are ever likely to see on the Flat."

Harley will miss a key stage of the British Flat racing season on turf, which starts at Doncaster on 29 March.

A DVD showing footage of his fall was sent by the PJA to doctors to help in their diagnosis and treatment.

Jason Maguire is recovering after coming out of an induced coma following a fall at Stratford.

Bryan Cooper, Ruby Walsh and Daryl Jacob are all sidelined with broken bones after being injured at the Cheltenham Festival.

Culloty says the horse, who beat On His Own in a photo finish and after a stewards' inquiry, will be aimed at the big race again next year.

He had initially indicated Lord Windermere, who won under Davy Russell, might run at the Punchestown Festival.