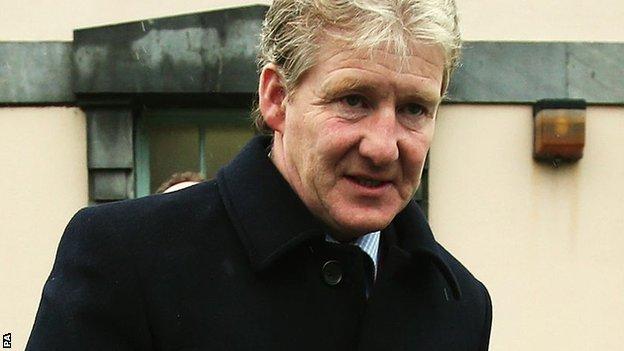 Irish trainer Philip Fenton's court hearing over alleged possession of steroids has been adjourned until May.

Fenton, 49, appeared in court on Thursday in his home town of Carrick-on-Suir, Co Tipperary, when prosecution lawyers asked for more time.

He faces eight charges over treatments and medicines found by Irish Department of Agriculture inspectors at his yard in January 2012.

Fenton has entered no plea and faces a fine or prison sentence if convicted.

Among the eight charges is the alleged possession of Nitrotain and Ilium Stanabolic and prescription medicines, including Engemycin 10%, Neomycin Penicillin and Marbocyl 10%.

The case was adjourned four weeks ago to allow the defence to file submissions and now the prosecution has asked for more time to consider those submissions.

Fenton is next due to appear on 15 May.

Last Instalment, Dunguib and Value At Risk were cleared to run after producing negative tests for any banned substances.

Leading owner Barry Connell has decided that none of his horses in training with Fenton will run again until after the case is concluded.

That means The Tullow Tank, who was pulled out of Cheltenham, will miss the big meetings at Aintree, Fairyhouse and Punchestown.