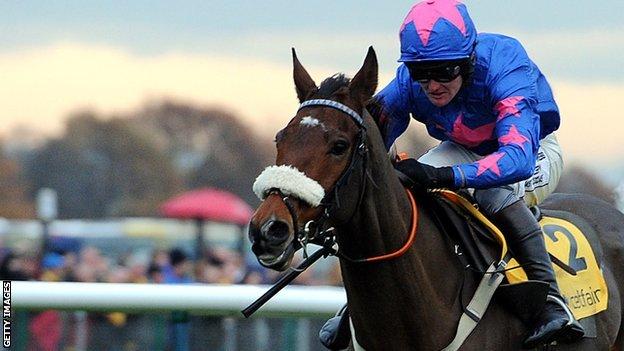 Jump jockey Joe Tizzard has announced his surprise retirement as a professional rider at the age of 34.

Tizzard, who rode for trainer father Colin, is known for his partnership with Cue Card, who won the 2013 Ryanair Chase at the Cheltenham Festival.

"Joe Tizzard was born in the same week as Michael Owen, and it was in not dissimilar style that the young jockey burst onto the sporting scene in the mid-1990s.

"Smiley, popular and a supreme horseman, Tizzard and his family had been quietly successful for ages, but were propelled into the big time by Cue Card.

"Jump racing, with its countryside roots, loved the story of a horse - bred in rural south Wales and trained on a West Country dairy farm - taking on the best at the Cheltenham Festival, and bringing home the bacon (so to speak) twice.

"The Tizzards' operation, on the borders of Somerset and Dorset, is large scale these days. Joe has been a major part of it all for some time, and will continue to be so."

"I've done my time as a jockey, I've had a fabulous time of it, but it's time to move on," he told Racing UK.

Dorset-based Tizzard said he had ridden fewer winners in recent years but only made the decision at 10am on Friday.

He scored an emotional success in November when Cue Card won the Betfair Chase at Haydock, before the pair were second in the King George VI Chase.

Cue Card was a leading contender for this year's Cheltenham Gold Cup before being sidelined by an injury.

Father and son also teamed up to win the 2007 Feltham Novices' Chase with Joe Lively and the Classic Chase at Warwick with Hey Big Spender in 2012.

Tizzard made his name as a young jockey for Paul Nicholls, winning the 1999 Arkle Chase at Cheltenham with Flagship Uberalles, following up at Aintree and winning the Tingle Creek the following season.

The 18-time champion jump jockey AP McCoy was among those to pay tribute, saying: "He'll be sorely missed, he's had a very successful career."