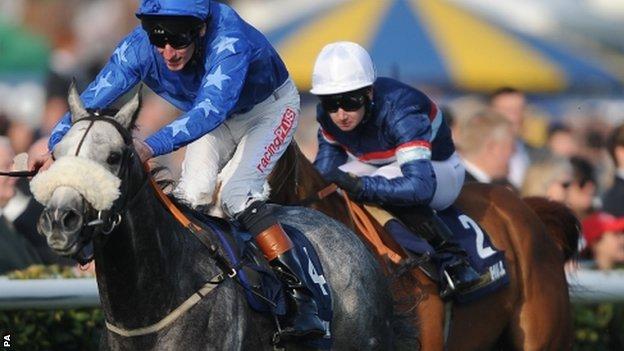 Ocean Tempest won the Lincoln Handicap at Doncaster at odds of 20-1 on the opening day of the new Flat season.

Ryan, who has only 20 horses at his Newmarket stables, said: "We ran him in the consolation race last year [finished fifth] but he wasn't ready. This was always his aim."

He added: "For a small stable likes ours, this is the icing."

Ocean Tempest had been running in Dubai over the winter and Ryan said: "He paid his way in Dubai. We thought he was a bit high in the weights for this, but we knew this ground was his thing.

"I couldn't believe how good it was when I walked it."

Jockey Kirby said: "Up to this race I'd been having a bad day, but Ocean Tempest gave me a perfect feel. At halfway I even got a little bit excited."

Several hopefuls were withdrawn because of the rain-softened ground, including the well-backed Captain Cat trained by Roger Charlton.

The Lincoln forms the first part of the betting Spring Double, which also includes next weekend's Grand National at Aintree.