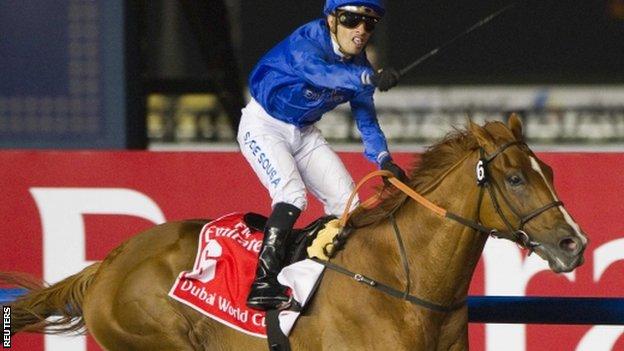 African Story won the Dubai World Cup at Meydan to give trainer Saeed bin Suroor and the Godolphin stable a sixth win in the world's richest race.

The seven-year-old went ahead in the straight and was well clear at the line.

Derby winner Ruler Of The World, who had a poor draw, was struggling from some way out under Joseph O'Brien.

It's an amazing feeling and he just proved he's the best

Seven countries were represented in the race, but the result was a clean sweep for the ruling Al Maktoum family of Dubai. Sheikh Mohammed also owns Cat O'Mountain (25-1), who finished third, while his brother, Sheikh Hamdan, owns the 14-1 runner-up Mukhadram.

The success followed what had been a disappointing evening for Godolphin as Cavalryman finished second in the Dubai Gold Cup and several fancied runners underperformed.

It was left to African Story to produce the ultimate triumph for owner Sheikh Mohammed, who is also the driving force behind racing at Meydan.

Jockey De Sousa said: "It's an amazing feeling and he just proved he's the best."

The horse was fifth in the race last season but De Sousa said: "He was very unlucky here last time when he banged his head in the stalls, but he has proved he's the boy."

Earlier jockey Jamie Spencer helped 33-1 chance Certerach cause an upset in the Dubai Gold Cup, before riding Toast Of New York to victory in the UAE Derby.