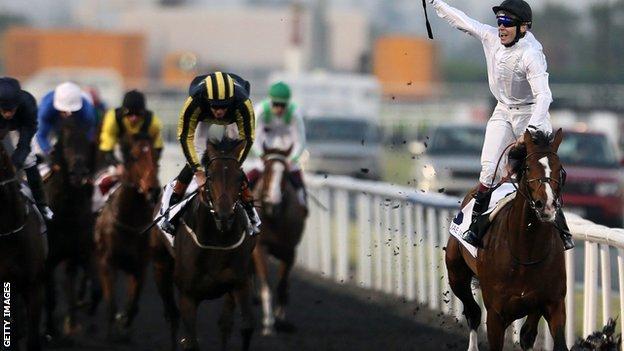 Trainer Jamie Osborne is planning to add Toast Of New York to the field for the Epsom Derby following his Meydan victory in Dubai on Saturday.

Ridden by Jamie Spencer, the son of Thewayyouare landed the Group Two UAE Derby by two and a half lengths.

Osborne hopes Toast Of New York can see out the trip at Epsom on 7 June.

He told At The Races: "It took Jamie until halfway down the back straight to pull him up and his pedigree suggests he'll stay."

Osborne added: "I'm going to see [owner] Michael Buckley and obviously we will discuss the future. It's not impossible [he will go to America] - all options are open to us. I will be supplementing him for the English Derby as well."

Osborne also suggested a return to Meydan next year, but this time with the Dubai World Cup as a target.

Saturday's UAE Derby had a first prize of £723,000, the biggest purse of Osborne's career and just £50,000 less than Ruler Of The World secured when he won the Derby at Epsom last June.