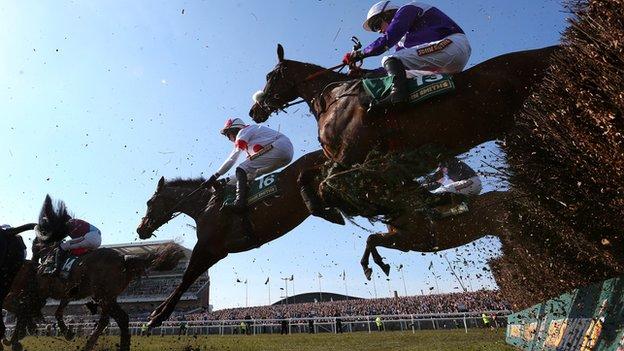 Godsmejudge and Katenko are among eight non-runners as 65 Grand National entries remain for Saturday's Aintree race, with a maximum of 40 to run.

Those yet to be guaranteed a place include Goonyella, Soll, Night In Milan, Saint Are and Tranquil Sea.

If, as expected, the race remains over-subscribed, the lowest-rated horses will be balloted out.

Teaforthree, the 8-1 favourite trained in Wales by Rebecca Curtis, finished third last year but 2013 winner Auroras Encore has been retired and runner-up Cappa Bleu is injured.

Champion trainer Henderson also has Hennessy Gold Cup winner Triolo D'Alene, Hunt Ball and Shakalakaboomboom as he looks to win the race for the first time.

The National, which has a record prize fund of £1m this year, is a handicap chase run over nearly four-and-a-half miles, with different weights given to runners based on previous form.

Sam Twiston-Davies, 21, will ride Tidal Bay as the 13-year-old - carrying top weight of 11st 10lb - bids to become the race's oldest winner since Sergeant Murphy in 1923.

Among the favourites with bookmakers this time is the 2012 Welsh National winner Monbeg Dude, which is part-owned by former England rugby union captain Mike Tindall, team-mate James Simpson-Daniel and Welsh fly-half Nicky Robinson.

Officials hope there will be no serious injuries after all runners came home safely in 2013, when a more flexible fence structure was introduced following two equine fatalities in each of the previous two runnings.