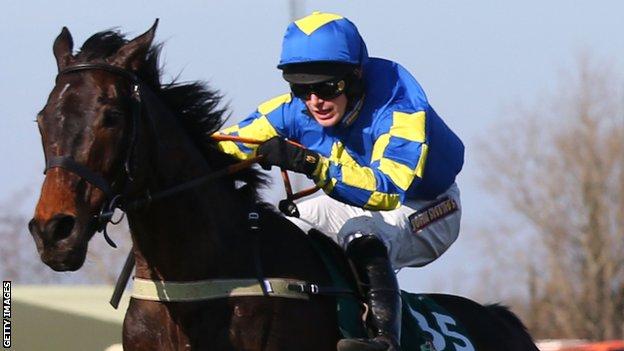 Racing reporters, correspondents and experts give their verdicts on who will win the Grand National at Aintree.

"As a co-owner of The Rainbow Hunter, I can say he's in great form and recorded a career best last time out. I promised James Simpson-Daniel, who part owns Monbeg Dude, that I would put his horse in the reverse forecast."

Gina Bryce, At The Races presenter

"Third last year, Teaforthree has enjoyed a relatively light campaign ahead of this target. Travelled well for a long way in the Gold Cup, which should put him spot on, and he jumped the Aintree fences well in 2013."

"There hasn't been an Irish winner of the National since Silver Birch in 2007, but Big Shu can do the business. The 2013 Cheltenham and Punchestown Cross Country Chase winner jumps extremely well and will stay all day."

"Progressive and lightly raced, Rocky Creek jumps well, travels strongly and will have no problem with the longer trip."

"Exceptionally well handicapped, Burton Port ran well on last start when ground too soft for him. That was after a breathing operation, and in my opinion, horses run better the second time after such procedures."

"Really impressed with the way Chance Du Roy operates around Aintree. For those who doubt his stamina he certainly wasn't stopping at the end of the Becher Chase."

"I sought out a lightly weighted contender and believe The Package looks best of those. My selection's form nicely franked as third at Cheltenham last month behind Friday's Aintree winners Holywell and Ma Filleule."

"On a handy mark and I think Last Time D'Albain stayed on really well when third in the last year's Topham Chase over the National fences. Warmed up for this with reasonable spin over hurdles."

"Balthazar King has got round in the past, is in cracking form and will probably be ridden more patiently. At some point jockey Richard Johnson will receive the wider public recognition he deserves as the uncomplaining perennial title runner-up to AP McCoy."

"For me, Tidal Bay is the class horse in the race. He's well handicapped despite having top weight and even though he's 13, it's a race in which older horses do well."

"Burton Port is a class horse who has come down markedly in the weights. Showed better signs latest, and has a tongue strap on for the first time. He has been on my mind all season."

Gary O'Brien, At The Races presenter and 5 live commentator

"I feel that Rocky Creek is lightly raced, open to improvement and on a decent handicap mark for top connections."

"I'm going for a Paul Nicholls 1-2 which would clinch the trainers' championship. Rocky Creek missed Cheltenham, comes here fresh and has a progressive profile."

"I think this race must have been Burton Port's target for some time and trainer Jonjo O'Neill appears to have revitalised a classy horse who could look very well handicapped if he takes to the fences."

"Sam Waley-Cohen, Long Run's jockey, is exceptional around the course, he has supreme confidence and a way of riding those big fences that works. His mount won the Gold Cup in 2011 and skipped Cheltenham last month."