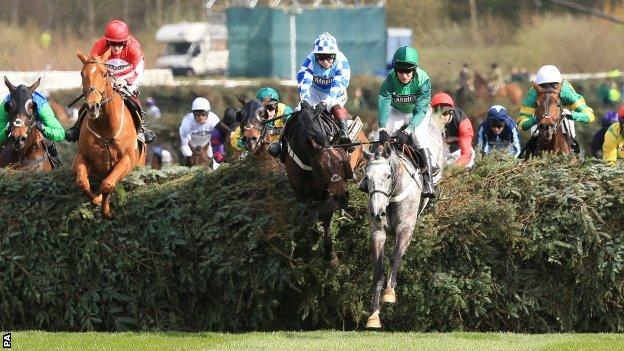 Jockey Paul Carberry has been cleared to ride Monbeg Dude in the Grand National at Aintree after a fall in the Topham Chase 24 hours earlier.

Carberry was passed fit after precautionary X-rays on a pelvic injury and following a visit to the racecourse doctor just after midday on Saturday.

Noel Fehily and Andrew Tinkler are also fit after falls in the same race.

One jockey who misses out is Mikey Fogarty, who was due to ride Vesper Bell in the National.

He had a fall from Bishopsfurze over the National fences in the Topham Chase and has been replaced in the National by Katie Walsh.

Fehily, who partners Rocky Creek, injured an elbow while Tinkler, who will ride Hunt Ball, hurt a wrist.

Fogarty fell at the seventh while Carberry was unseated from Kauto Stone at the eighth fence.

Tinkler's mount, Tanks For That, went at the 12th and Fehily came down at the 15th on Fago.

No horses were injured during Friday's race, which was won by Ma Filleule who was completing a treble on the day for jockey Barry Geraghty and trainer Nicky Henderson.