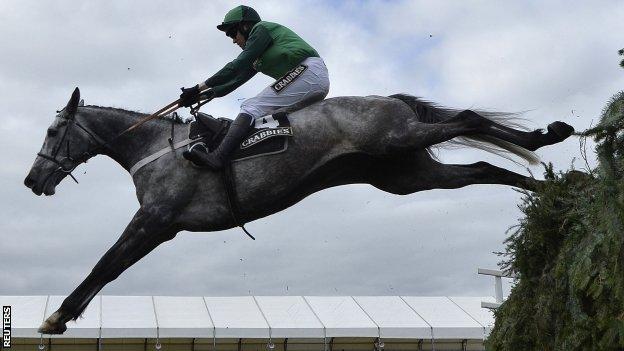 Trainer Nicky Henderson believes he has the "quality and quantity" to record his first Grand National win on Saturday after warming up for the steeplechase with a treble at Aintree.

The three-time champion trainer, 63, is the most successful handler at the Cheltenham Festival with 51 winners.

Henderson will saddle four of the 40-strong National field and said he has his "best chance yet".

He added: "You need the right ammunition. I'll keep trying."

Henderson's quartet are headed by Long Run, the Cheltenham Gold Cup winner in 2011 and twice successful in the King George VI Chase, who will be ridden by amateur Sam Waley-Cohen.

He also has Hunt Ball, Triolo D'Alene and Shakalakaboomboom.

"Every now and then, the right horses come along. We've had some close shaves, we've been second twice. It's there but it's avoided us so far," he said.

His near misses came with his first runner Zongalero in 1979 and The Tsarevich, who was also second eight years later. But since 1991 only two of his entries have finished.

Henderson and jockey Barry Geraghty enjoyed a hat-trick of wins on Friday as Ma Filleule won over the Grand National fences to claim the Topham Chase.

They also won the opening race with Josses Hill in the Novices' Hurdle, and then with Beat That in the Sefton Novices Hurdle later in the day.