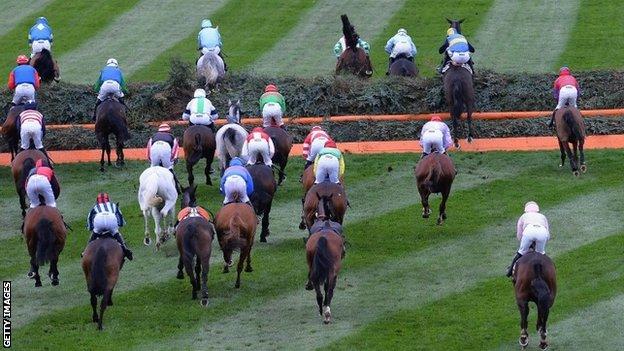 The welfare advisor to the British Horseracing Authority has welcomed confirmation there were no fatalities in the 2014 Grand National.

Only 18 of the 40-strong field finished but, for the second year running, all horses and jockeys returned safely.

"Today's race is more evidence that responsible riding from most jockeys and new fences are improving safety."

Pineau De Re, ridden by Leighton Aspell and trained by Dr Richard Newland, won the 167th National at Aintree at odds of 25-1.

The Aintree fences, which now have a core made of more flexible plastic, rather than wood, and are covered by the traditional spruce, were redesigned for the 2013 showpiece after two fatalities in each of the previous two years.

While World Horse Welfare was pleased to see the latest running of the race pass off without serious incident, it would like to see a reduction in the size of the field.

"Aintree can take great credit for demonstrating that considered safety improvements need not detract from the thrill and drama of the world's most famous horse race," Owers added.

"While we will be reviewing the race more closely in the coming days, we are concerned at the relatively high number of fallers and unseated riders which pose safety risks to horses and their jockeys.

"World Horse Welfare would still like to see a trial reduction in the maximum field size. We look forward to discussing this with Aintree and encourage continued vigilance."

Following the race, Jack Doyle was given a 12-day suspension by the stewards for, in their view, failing to pull up a horse who was clearly exhausted in Wayward Prince, who fell at the third-last.