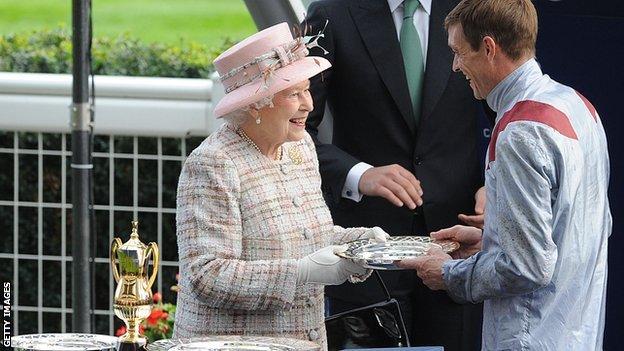 Ascot will stage Europe's richest handicap mile with the addition of the £250,000 Balmoral Handicap to the British Champions Day card in October.

The race will have a maximum field of 30 and only be open to horses that have finished during the season in the first six in 18 qualifier races.

Qualifying races have been chosen from among the 35 races in the Champions Series that runs throughout the season.

Rod Street, chief executive of British Champions Series, said: "This record-breaking prize fund underpins the day's status as one of the most important race meetings in the world.

"Overall prize money on British Champions Day has increased by 25% since the inaugural [event] in 2011."

This year's British Champions Day, the fourth, takes place on 18 October, with the Balmoral Handicap the culmination of a day's racing that also includes the £1.3m Champion Stakes, the world's highest-rated race, and the £1m Queen Elizabeth II Stakes.

The Balmoral title has not been used for a race since Royal Ascot in 2003, and Ascot chief executive Charles Barnett said: "Her Majesty The Queen has graciously consented to the name Balmoral Handicap being reintroduced for the new race on British Champions Day."

Qualifiers for the race include the Bunbury Cup at Newmarket, three events at Royal Ascot and the Betfair International at Ascot. They begin with the Mafki Suffolk Handicap at Newmarket on 3 May.