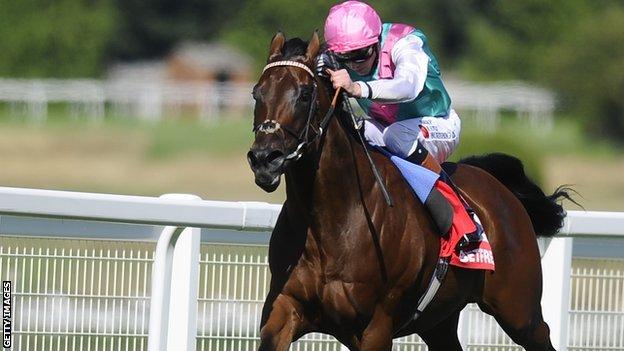 The 15-8 favourite Kingman showed his prowess with a dominant display to win the Greenham Stakes at Newbury.

James Doyle's mount, trained by John Gosden, is now at the head of the market for Newmarket's 2,000 Guineas on 3 May.

Connections of the winner were given a moment of concern when Astaire took the lead with two furlongs to go.

Three years after the great Frankel used the Greenham Stakes as his platform to 2000 Guineas greatness, Kingman was no less impressive in seeing off a high quality field.

In-form trainer John Gosden, not one for hollow hyperbole, paid the colt a notably glowing compliment as having "without doubt the highest cruising speed of any horse I've trained over this [7-furlong, 1400 metre] trip".

Technically lacking in experience, the colt actually looked like an old pro as he burst by and walked all over his rivals, and so long as the going isn't too firm, he looks outstanding for the Guineas.

But the three-year-old showed a superb turn of foot to take the lead and go on to win by four and a half lengths.

Kingman is now battling for favouritism with the Aidan O'Brien-trained Australia for the first Classic of the year.

"He's been in good order this spring and has worked well on the bridle," said Gosden. "He's pleased me in everything he has done, we came here for a trial and he has passed his trial well.

"Without doubt he has the highest cruising speed of any horse I've trained over this trip - seven furlongs and a mile.

"He's a proper horse, there's the Guineas and hopefully there's other races down the other road, I think we'll be staying at a mile. I couldn't be happier with him."

The winner runs in the same Prince Khalid Abdullah colours as the legendary Frankel, who also won the Greenham before a stunning victory in Newmarket's 2,000 Guineas, one of 14 wins in an unbeaten career.