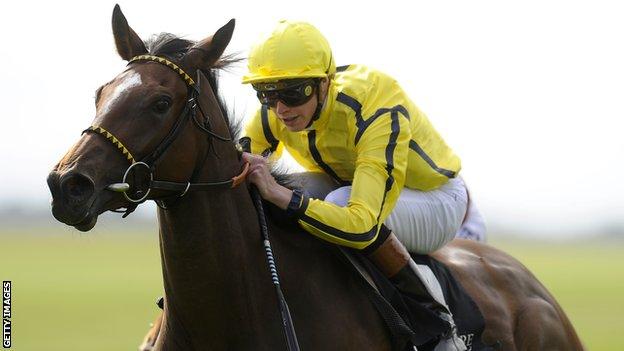 Three-year-old filly Rizeena leads the betting for the 4 May race, which Pebbles won for Brittain 30 years ago.

"I've trained a lot of very good fillies and been very lucky with them. This filly ranks well up with them."

Pebbles won the 1,000 Guineas in 1984 and went on to become the first filly to take the Eclipse Stakes and the first British-trained horse to secure a victory at the Breeders' Cup, claiming the Breeders' Cup Turf in her final race in 1985.

Rizeena, owned by Sheikh Rashid Dalmook Al Maktoum, will go straight into the 1,000 Guineas at Newmarket without a trial this season, having won the Queen Mary and Moyglare Stud Stakes last year.

But Brittain, who hopes to have Ryan Moore in the saddle, is confident of her form after seeing her on the Warren Hill gallops.

"I take more notice of the eyes than I do the coat. You can see that brightness in her eyes. They have the look of eagles about them," he said.

"The weight is coming down to 480kg. Her winter weight went up to 505kg. We've brought her down through the months and she'll race at the 475-480kg mark. We're one run away from that."

Rizeena is already pencilled in for the Oaks in June, but Brittain expects her to forego the Epsom classic.

"We could go the Irish 1,000 Guineas, Coronation Cup and possibly later in the year the Nassau. That would be the plan at the moment."