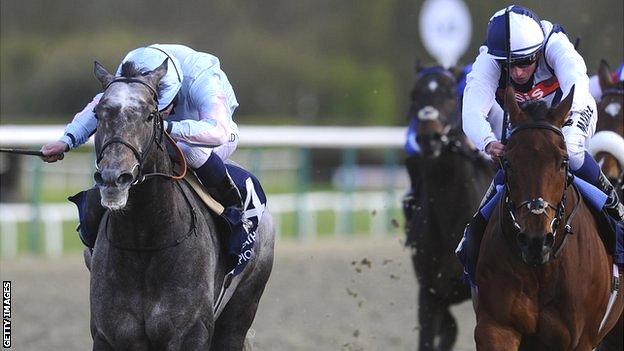 Grandeur claimed the Coral Easter Classic in front of a record modern-day crowd at Lingfield as the first ever British race meetings on Good Friday took place.

Nearly 9,000 were in attendance as Ryan Moore rode the Jeremy Noseda-trained five-year-old to snatch victory from Dick Doughtywylie in the final stride.

I said beforehand that today was redemption day

The Winter Derby winner Robin Hoods Bay was third at the Surrey track.

Trainer Robin Bastiman described the sprinter as a "legend" after the 12-year-old came out of retirement to come within a nose of winning his own race at the East Lothian track - the Borderlescott Sprint Trophy.

"That was fantastic," Bastiman said. "He still wants to do it. I'm so proud of him - he's a one-off.

"I think everyone in the weighing room was willing him to win, but never mind. He's a legend."

Despite a disappointing showing in the Winter Derby in March, trainer Noseda was confident that Grandeur could perform at Lingfield and the 6-4 favourite duly delivered.

"I'm slightly disappointed he has made such hard work of it as to me he's better than he's shown today. [But] he's won, that's the main thing, and I'm thrilled."