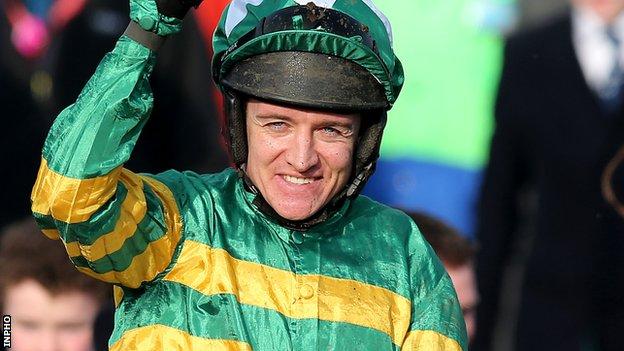 Geraghty got the ride as champion jockey AP McCoy, the usual first choice of owner JP McManus, was suspended.

It was a second Irish National success for trainer Jonjo O'Neill and the first victory by a favourite in the race for 15 years.

Trainer O'Neill had last triumphed in the 2007 renewal with Butler's Cabin.

His latest hero had looked a novice chaser to follow in the early stages of this season but made mistakes as one of the leading contenders for the National Hunt Chase at Cheltenham and had finished only sixth.

Geraghty was close to the pace and travelling well for most of the three miles and five furlongs.

But the Dessie Hughes-trained Golden Wonder made an attempt to slip the field at the home turn and it was only on the short run-in that Shutthefrontdoor poked his head in front as Golden Wonder settled for second, just ahead of Saoirse Dun and Jamsie Hall.

"I thought I was in trouble two from home but it came good," said Geraghty whose brother Ross won the race on Bunny Boiler in 2002.

"I live just a mile down the road and this means a lot to me."