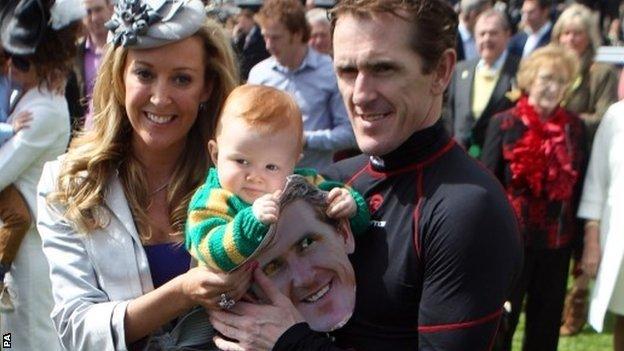 AP McCoy was crowned champion jump jockey for the 19th successive year at Sandown on Saturday.

McCoy, who is 40 next month, rode more than 200 winners this season despite missing the start through injury.

The record-breaking Northern Irishman was hurt in a fall at Cheltenham in April 2013 which left him in intensive care.

In November, he passed the mark of 4,000 career wins with victory on Mountain Tunes at Towcester.

McCoy, who was accompanied by dasughter Eve and baby son Archie who had a heart operation last month, indicated he would like to eventually reach the 5,000-winner mark.

"I feel as good as ever. I'd like to win a few more jockeys' titles yet," he said.

"It has been the most traumatic year of all personally, with my son Archie having a major operation before Cheltenham. Hopefully he will be OK, but we won't probably know for a while longer."

The jockey's triumphs in the 2013-14 season, which ends at the Surrey track on Saturday, have come at a winning strike rate of 24%.

McCoy finished more than 60 wins ahead of nearest rival Richard Johnson, who has never been champion and is runner-up for the 15th time.

"You start off at the beginning of the season and the goal is to be champion, and I've been lucky enough to achieve it 19 times," McCoy told BBC Radio 5 live. "I'd like to achieve it again next season if possible."

Fellow jockey Sam Twiston-Davies said: "We all look up to him massively. He's the most amazing man and we're all very lucky to be riding in the same era as him."

Paul Struthers, chief executive of the Professional Jockeys' Association, said: "What can one say about AP McCoy? He is simply a phenomenon.

"Who would have predicted almost two decades ago when he became champion jump jockey for the first time that he would not relinquish the title for almost 20 years? And he is still going strong in his 40th year and will soon be aiming for title number 20 in 2014/15.

"As well as being the greatest jump jockey in history, he is also a terrific gentleman and a true ambassador for our sport."

McCoy is the retained rider for JP McManus, who was the season's leading owner.