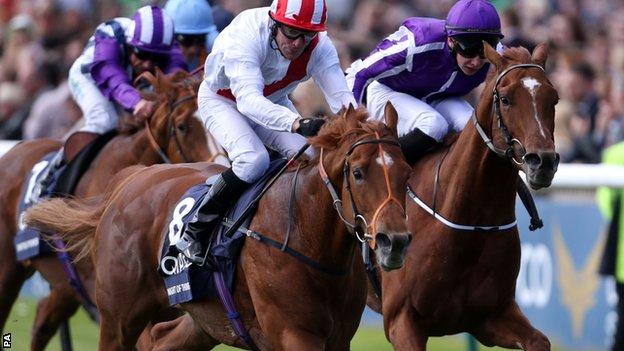 Night Of Thunder, ridden by Kieren Fallon and trained by Richard Hannon, pulled off a big upset to win the 2,000 Guineas at Newmarket.

The 14-strong field split into two for the one-mile race and, despite wandering off line, 40-1 shot Night Of Thunder triumphed by half a length.

It was the 206th running of the first Classic of the Flat season.

Night Of Thunder, who secured a £255,00 first prize, was one of three runners in the race trained by Richard Hannon, who is in his first year since taking over the licence from his father, also called Richard.

The field splitting was not ideal, but that's racing

"It is a shame dad couldn't be here but he left this morning for Goodwood," said an emotional Hannon. "Dad's clever, I think he has a feeling when something is going to happen.

"I can't say winning the Guineas was in the air, and we wouldn't have been too worried if it didn't happen, but they are three very good horses.

"It makes a big difference to everyone at home and it's nice to have a 2,000 Guineas winner."

He said: "I thought I was going to go and win easily but when I went up half a length, he stopped with me. He was still good enough to win. That was a serious performance."

Teddy Grimthorpe, racing manager for Kingman's owner Khalid Abdullah, said: "The field splitting was not ideal, but that's racing and we accept that.

"He has won his side and we'll have bigger disappointments than finishing second in a Classic. The ground was fine and the winner won it fair and square."

Australia's trainer Aidan O'Brien said: "He's still a baby and the Derby trip should not be a problem. On pedigree, you'd say he was a Derby horse, but he was working like a Guineas horse."