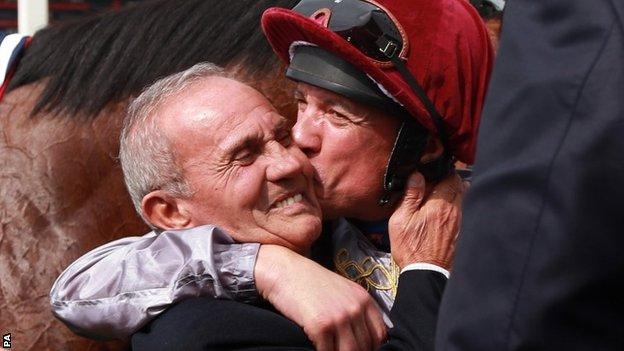 The jockey, who missed much of 2013 through a drugs ban and injury was securing his first British Group One win for nearly two years.

Tullius was two and a quarter lengths away in second, with Verrazano running on well for third.

It was announced after the race, that the sheikh would donate over £100,000 in winnings plus prize money from other leading horses this season, to Jack Berry House in North Yorkshire which aids the rehabilitation of injured jockeys.

Dettori, 43, is the organisation's retained rider and enjoying riding winners at the highest level again following his split from Godolphin in late 2012.

After celebrating by planting a kiss on the cheek of his father Gianfranco, the three-time champion jockey said of Olympic Glory: "He quickened like a true champion. His form is rock-solid and he goes on any ground.

"He's a great ride, has a great kick and is a jockey's dream. I'll be surprised if he's not champion miler again."