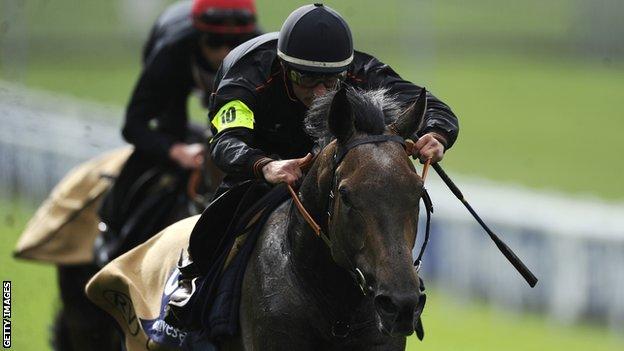 Italian-born jockey Andrea Atzeni is increasingly fancied to have to wait considerably fewer years than his compatriot Frankie Dettori to win the Investec-sponsored Derby at Epsom.

When Authorized provided Dettori with his first success in 2007, the colt was ending a losing streak for his rider that stretched back over 14 frustrating stagings of British Flat racing's greatest prize.

In contrast, as Atzeni, 23, prepares for the mount on this year's third or fourth favourite Kingston Hill, he's tipped to taste Derby glory at the very first time of asking.

Kingston Hill, a grey, finished eighth in the 2,000 Guineas, but is undefeated in three other career starts, a tally that includes victory at racing's highest level in the Group One Racing Post Trophy.

To give the form a solid feel, those behind him that October afternoon included Snow Sky and The Grey Gatsby, both successful in Derby dress rehearsals this season, respectively at Lingfield and York.

And, significantly, since the turn of the century, four winners of the Doncaster prize - High Chaparral, Motivator, Authorized and Camelot - have all graduated to success in the Epsom Classic.

Atzeni seems quietly confident about Kingston Hill - trained by Roger Varian for owner Paul Smith - increasing that stat to five, believing the defeat in the 2,000 Guineas can be forgiven.

He said: "He missed the start - he slipped coming out of the stalls - and we were playing catch-up from the start which wasn't ideal for him, a horse for which the mile [Guineas distance] is a bit too short for him.

"To be fair to him, he stayed on well up the hill, and was only beaten four or five lengths, and if he hadn't missed the start he'd have probably only been beaten by two lengths.

"Straight after the race, I didn't know what to say because I was a little bit disappointed - in the build-up to the race I thought he had a good chance of winning it.

"But then you get home, and sit down, and watch the race again, and you realise it wasn't a bad run."

Varian, for whom Kingston Hill, a son of the stallion Mastercraftsman, is also a first Derby contender, agrees, as do a steadily growing band of pundits.

If, on reflection, we find ourselves wondering just how on earth a colt, whose stamina was already lasting a mile as a two-year-old, was fancied for the Guineas when the half-mile-longer Derby was always the more obvious target, it would be no great surprise.

The distinct possibility of rain-softened going would appear to enhance Kingston Hill's prospects, and he handled the track's famously tricky contours like an old hand in a pre-race spin.

Were he to win - and become, incidentally, only the fourth grey-coloured horse, and the first since Airborne (1946), to be successful - he'd complete what would be seen as a famous victory for his jockey.

Like Dettori before him, when the 15-year-old Andrea Atzeni arrived in Newmarket, to work in his case for Italian-born trainer Marco Botti, he didn't speak a word of English.

And he acknowledges learning the new language made a big difference to his ascent from stable lad to a permanent position well inside the top 10 Flat jockeys.

"For the first year, I didn't really speak any English because I was hanging around with Italians most of the time," he said with an accent now almost as un-pronounced as Dettori's is pronounced.

"Obviously it was hard, very difficult at times, but at the end of the day it was my decision, I didn't have to do it, and I wanted to do it."

"Big time, it made a difference."

In true Italian style, the sharp-dressing Atzeni, who describes himself as being as laid back as the colt that he partners in the Derby, has been known to celebrate success with expansions to an already bulging wardrobe.

However, he insists he hasn't really thought about any post-Epsom shopping list.

"Winning would be great. I don't even think about it to be honest with you, but if it does happen, it'd be pretty good.

"If it comes up soft, I know my horse handles it because he's won on it and I think he prefers soft ground.

"Sometimes when it does come up soft, it's not about the best horse in the race, but the horse that handles the ground better, so there could be a big surprise."