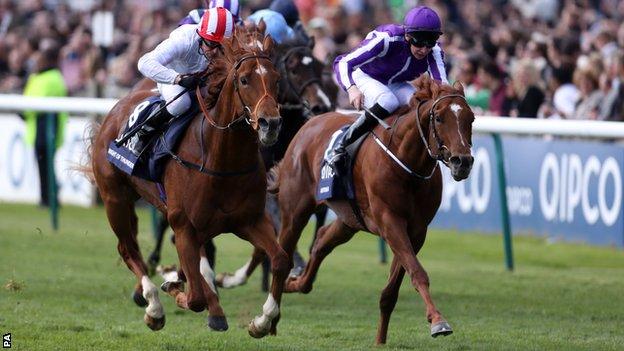 Sixteen runners, headed by favourite Australia, have been declared for the Derby at Epsom on Saturday (16:00 BST).

Snow Sky, trained by Sir Michael Stoute, was the only withdrawal from the famous Classic as the final field was named.

Joseph O'Brien will ride Australia for his father Aidan, who is bidding to become the first trainer to win the race three years running.

Ryan Moore has been booked to ride stablemate Geoffrey Chaucer.

Australia came third in the 2,000 Guineas at Newmarket last month, but is bred to be suited by the mile-and-a-half Derby trip.

O'Brien has indicated the horse, a son of 2001 Derby winner Galileo and 2004 Oaks victor Ouija Board, is the best he has trained.

He has saddled four previous Derby winners in Galileo, High Chaparral (2002), Camelot (2012) and last year's victor Ruler Of The World.

Australia and Geoffrey Chaucer will be joined by Orchestra and Kingfisher for O'Brien, while other leading challengers include Kingston Hill, True Story and Fascinating Rock.

Snow Sky, who banged a joint in his stable earlier in the week, will now be aimed at Royal Ascot later in June where he could run in the King Edward VII Stakes.

His jockey, James Doyle, has been booked to ride Pinzolo for Godolphin, which raises further question marks about the future of Mickael Barzalona.

The 22-year-old Frenchman, who won the Derby on Pour Moi in 2011, is without a ride in the race despite being a retained jockey for Sheikh Mohammed's team, with Kieren Fallon on True Story and Kevin Manning partnering Sudden Wonder.