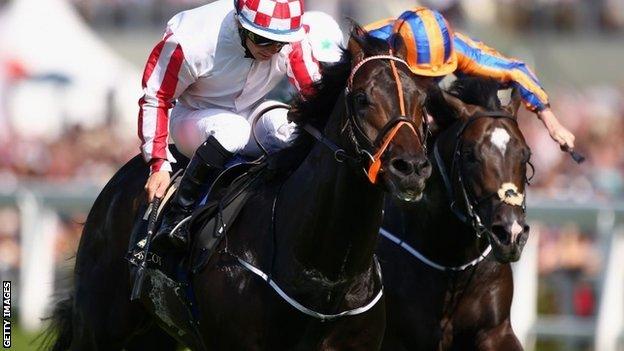 The 7-2 favourite, ridden by Wayne Lordan, beat runner-up Due Diligence by one-and-a-half lengths, with Aljamaaheer third.

Ryan Moore rode a Saturday treble to end the week as the meeting's leading jockey with six victories.

Sole Power was a third victory of Royal Ascot 2014 for Lynam (Anthem Alexander won the Queen Mary Stakes), who trains the sprint duo for the Power family, known for their bookmaking exploits.

The trainer said after Saturday's triumph that he had placed a £500 double bet at 66-1 on the two top sprinters winning.

He said they would now be aimed at the July Cup at Newmarket.

"Trainers get 10 per cent (of prize-money) for a reason - it's only 10 per cent to do with us," said the County Meath trainer.

"I'm very lucky to have very good horses, very good owners, a great family to back me up and marvellous staff."

Moore completed his treble in the Alexandra Stakes on Pique Sous after earlier victories aboard Arab Spring and Telescope.

There was a sad finale to the final race when Tiger Cliff, who was sent off the 5-2 favourite, collapsed and died of a suspected heart attack.