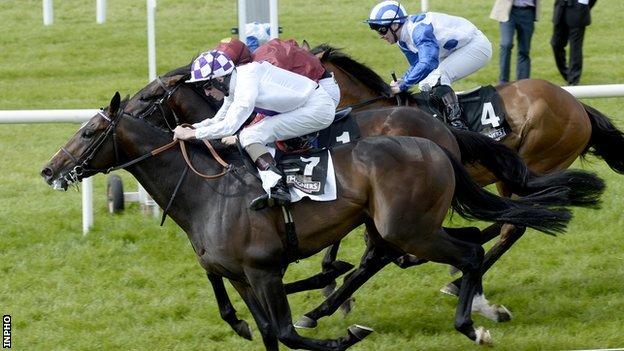 Wexford Town produced a strong finish to win the Ulster Derby at Down Royal on his handicap debut and give trainer Jim Bolger his fourth success in Northern Ireland's richest race.

Ridden by Bolger's son-in-law Kevin Manning, the 7-1 shot hit the front in the dying strides to come home ahead of second-placed Magnolia Beach (6-1).

Azurite, the 9-2 co-favourite, led going into the closing stages, but had to settle for third.

Nine runners lined up at the start.

Trainer Ger Lyons had the consolation of seeing his horses come home second and third in the 100,000 euros showpiece, with top weight Magnolia Beach coming close with Colin Keane in the saddle.

Notarised and Urban Moon were the other pre-race 9-2 joint favourites.